First of all, this is a quick note to say that I am moving house this week so won’t have much time for blogging for a while – there are just so many other things that need to be done! I have prepared and scheduled some posts in advance, so you probably won’t notice any difference, but I might be slow to respond to comments or to catch up with commenting on your blogs. I’m hoping to get settled in quickly so that things can get back to normal, but meanwhile here is my review of one of last month’s reads, The Night Tiger. 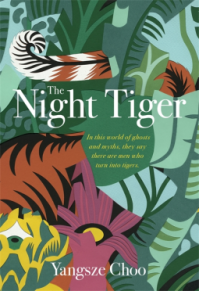 The Night Tiger was a surprise. I had been drawn to it mainly by the colourful cover and the fact that it was set in Malaya (now part of Malaysia), a country I know very little about, but I didn’t really expect to like it very much. I hadn’t read Yangsze Choo’s first novel, The Ghost Bride, because the subject didn’t appeal to me, and it sounded as though this book, like that one, would have a very strong magical realism element – and I’m not much of a fan of magical realism. Well, I was wrong about that; although there are times when the story does veer towards the fantastical, most of it is concerned with simply describing the folklore and superstitions of the Chinese people of Malaya and asking us to accept that some of these things may actually be real.

The story is set in the 1930s and is told from two different perspectives. First there’s Ren, an eleven year-old houseboy whose master, Dr MacFarlane, has recently died. While on his deathbed, the doctor asked Ren to carry out a very special task for him: to find his severed finger and bury it in his grave beside his dead body. This must be done within forty-nine days, otherwise Dr MacFarlane’s soul will be condemned to roam the earth forever. In need of new employment, Ren enters the service of another doctor, William Acton, then begins his quest to locate the missing finger.

Our other main character is Ji Lin, a dressmaker’s apprentice who has been secretly working in a dance hall in Ipoh to earn the money to pay off her mother’s gambling debts. While dancing with a salesman one night, she sees a little glass bottle fall from his pocket and, catching it before it hits the ground, she finds that it contains a shrivelled finger. This gruesome discovery leads Ji Lin to cross paths with Ren and when they each begin to have recurring dreams involving a train journey, it seems that their lives are becoming intertwined in other ways as well.

I enjoyed The Night Tiger much more than I thought I would. The setting is fascinating, of course; I have read two other books set in Malaya (The Garden of Evening Mists by Tan Twan Eng and The Separation by Dinah Jefferies) but they are very different types of books and don’t explore Chinese and Malaysian myths and legends the way this one does. The folklore surrounding the legend of the weretiger was particularly intriguing; there are hints that one could be responsible for the unexplained deaths that have been occurring around the town, and we can either believe that this is true or we can just believe that the characters in the story believe it is true, if that makes sense!

Both main viewpoint characters are easy to like; I felt closer to Ji Lin, because her story is told in the first person whereas Ren’s is told in the third, but I did love Ren too. He often seems very mature for his age – probably because he has been forced to grow up quickly due to his personal circumstances – but at other times he behaves more like the child he still is.

I’m still not sure whether I want to read The Ghost Bride, but I will look out for Yangsze Choo’s next book and see if it appeals.

Thanks to Quercus Books for providing a copy of this book for review via NetGalley.

23 thoughts on “The Night Tiger by Yangsze Choo”