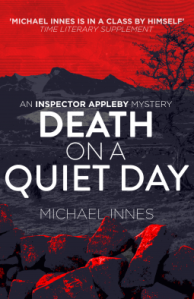 So far most of the books I’ve read in Michael Innes’ Inspector Appleby series have been very different from each other. Some, like Hamlet Revenge! and There Came Both Mist and Snow, are fairly conventional murder mysteries; the brilliant Lament for a Maker has the feel of a Victorian sensation novel; and The Daffodil Affair and Appleby’s End are so strange and surreal as to defy classification (and are my least favourites of his books). This one, originally published in 1956 as Appleby Plays Chicken, is best described as a thriller with a chase element, making it similar to The Secret Vanguard in that respect.

The novel opens with student David Henchman and a small group of friends from university attending a reading party in the Dartmoor countryside:

A group of young men facing their final examinations within a year; a tutor, ambitious for his charges or merely amiable, prepared to spend part of his vacation in their company; comfortable quarters in some quiet country place, with hills that can be climbed or antiquities that can be inspected in the course of a long afternoon.

Early one morning, David decides to get away from the others for a while and go for a walk in the spring sunshine. Daydreaming as he walks, David fails to pay attention to his map and finds himself approaching the great hill known as Knack Tor. Seeing a column of smoke rising from the top of the hill, he begins climbing up to investigate, but is unprepared for what he finds there – the body of a dead man with a hole in his forehead and a revolver in his hand. As David wonders what to do next, he becomes aware that he is not alone…someone else is up on that hill with him and that someone will stop at nothing to ensure David keeps quiet about what he has seen.

The first half of the book is devoted to one long episode in which David is chased through the countryside on foot, by car and by horse as his pursuers seem to multiply and appear out of nowhere. It’s fun to read and reminded me of John Buchan’s The Thirty-Nine Steps – but unlike the chase scene in The Thirty-Nine Steps, this one comes to an end before it has time to become tedious. Inspector Appleby then appears on the scene and the whole tone of the novel changes. As Appleby begins to investigate the murder, the other students and their tutor are brought into the story, and with the viewpoint moving away from David Henchman we can begin to piece together what is going on.

The murder mystery aspect of the novel is nothing special, to be honest. There are only a few suspects and the solution is not particularly clever or surprising. This is definitely a book that, if you read it, you will remember not for the mystery but for that long, desperate race across the moors.

6 thoughts on “Death on a Quiet Day by Michael Innes”