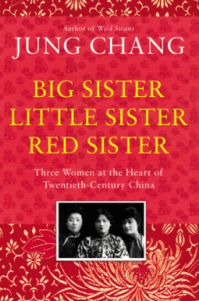 Jung Chang’s Wild Swans is one of the best non-fiction books I’ve ever read, so when I saw her new biography, Big Sister, Little Sister, Red Sister, available on NetGalley, I knew I wanted to read it. As the title suggests, this is the story of three sisters – the Soong Sisters – who were at the heart of twentieth century Chinese politics. Like Wild Swans, it gave me some fascinating insights into a country whose history I know very little about, but unlike Wild Swans, the author has no personal connection with the women she is writing about and I thought that made it a much less immersive and powerful read.

Despite their important roles in Chinese history, I’m ashamed to say that I had never heard of the three Soong Sisters before reading this book. In case anyone else hasn’t heard of them either, here’s a quick introduction:

‘Big Sister’ Ei-ling, born in Shanghai in 1888, was the eldest daughter of Charlie Soong and Ni Kwei-tseng. Through her marriage to the banker H.H. Kung – who later became Minister of Finance in the Nationalist government – Ei-ling was one of China’s richest women.

‘Little Sister’ May-ling was the youngest of the three. As the wife of Chiang Kai-shek, who was chairman of the Nationalist party (the Kuomintang) and later President of the Republic of China, May-ling was China’s First Lady. With her American education and excellent command of the English language, she provided a link between Chinese and Western cultures.

In the middle was Ching-ling, or ‘Red Sister’. In 1915, she married the much older Sun Yat-sen, the revolutionary leader who helped to overthrow the Qing Dynasty. After Sun’s death, Ching-ling’s continued involvement in left wing politics and her support for the Communist Party often put her in direct opposition to Big and Little Sister.

The book takes us through the lives of all three of these women from birth to death, comparing the different paths they choose to follow and describing their achievements and their influence on Chinese politics and society. Rather than devoting a separate section of the book to each sister, Chang jumps from one to the other and back again, moving forward chronologically over a period of more than a hundred years. As this is the first time I’ve read about the Soong sisters I’ve no idea how they are usually portrayed, but it seemed to me that Chang’s account was quite fair and balanced, showing sympathy for all three women but an awareness of their faults and weaknesses as well.

I found Ei-ling the least interesting to read about. With her wealth and position, there’s a sense that she is very detached from the realities of life, although she does come across as a generous and dutiful sister who tries to help her younger siblings in any way she can. May-ling is more appealing; although she is depicted as ambitious and sometimes extravagant, she also seems warm and compassionate, with a genuine interest in carrying out humanitarian work. But it was Ching-ling who intrigued me the most, with her unwavering dedication to the communist cause that sets her apart from her sisters and creates divisions in the family that never really heal. Was she, as one observer says, ‘most responsive and likeable, quiet and poised but misses nothing’ or was she, in the words of another, ‘basically a cold, hard, ruthless woman who knows what she wants and how to get it’?

Although the three Soong sisters all found themselves in positions of influence and power, these positions initially came about because of the men they chose to marry and that, for me, was one of the problems with this book. Almost as much time was spent describing the lives and careers of Sun Yat-sen, Chiang Kai-shek and H.H. Kung as was spent on May-ling, Ei-ling and Ching-ling, who were supposed to be the subjects of the book. Overall, it felt more like a general political history of twentieth century China than a biography of three specific people. I found it a much more challenging read than Wild Swans, which was as gripping as fiction, and it has taken me more than a month to finish it as there was just so much information to take in and digest. I can’t pretend that I am now an expert on Chinese politics, but I do feel that I learned a lot from this book and although it was a struggle at times, I’m glad I persevered and finished it!

Thanks to Jonathan Cape for providing a copy of this book for review via NetGalley.