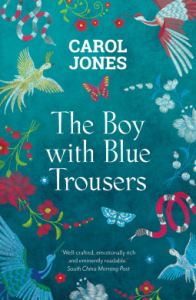 I love learning about the histories and cultures of different countries, so I was pleased to find that Australian author Carol Jones’ new novel, The Boy with Blue Trousers, is set in not one location but two – the mulberry groves of China and the goldfields of Australia – and introduces us to two women leading very different lives.

In 1850s China, seventeen-year-old Little Cat is growing up in a small village on the Pearl River Delta. Like the other girls in her community, she spends her days picking mulberry leaves and teasing out the threads from silkworm cocoons to produce reels of silk. It’s hard work, but it is the only life Little Cat has known and, now that she is approaching adulthood, she is growing nervous about what the future may hold. What sort of marriage will the matchmaker arrange for her? Will her husband and his family be kind? Will she have to go and live in another village far away from her own?

In the end, though, none of these things matter to Little Cat, because a disastrous encounter with the village headman, Big Wu, forces her to flee the country in fear of her life. Disguised as a boy, she embarks on a ship bound for Australia where she will join the hundreds of men heading there from China who are hoping to make their fortune in the goldfields.

Meanwhile, another young woman, Violet Hartley, has recently arrived in Australia. Violet, a governess, is trying to escape from her own past in England, and Australia seems like a place full of opportunities. When her first job, looking after two small children, proves to be not quite what she’d hoped for, she decides to accompany the Chinese immigrants on their journey – a decision that leads to her path crossing with Little Cat’s and tying the two separate threads of the story together.

The Boy with Blue Trousers is written in the form of two alternating narratives, so that we spend one or two chapters with Little Cat before switching to Violet for a while and then back again. This allows us to get to know both characters equally well and to see how, although they are living in very different environments, they face similar struggles as unconventional, independent women who don’t conform to the expectations of their respective societies. I have to admit, I didn’t like Violet at all; while I did have sympathy for her situation and the loss of her reputation following an affair with a married man in England – unfair when the man involved didn’t suffer in the same way – I just didn’t find her a very appealing character, especially in comparison to Little Cat, whom I loved.

I had a few problems with this book – apart from not liking Violet, I thought the way in which her story came together with Little Cat’s and the reaction they had to each other felt odd and unconvincing – but I was impressed by the sense of place Carol Jones creates. I particularly liked the descriptions of the mulberry trees, river banks, alleys and courtyards of Sandy Bottom Village, Little Cat’s home in the Pearl River Delta, but the coastal landscape of Robetown in South Australia is also beautifully portrayed.

Carol Jones is not an author I’ve come across until now, but I see she has written another novel, The Concubine’s Child, set in Malaysia, which also sounds interesting. If any of you have read that one, let me know what you thought.

Thanks to Head of Zeus for providing a copy of this book for review via NetGalley.

8 thoughts on “The Boy with Blue Trousers by Carol Jones”