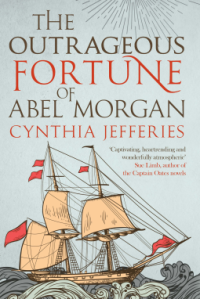 Cynthia Jefferies is probably better known as an established children’s author writing under the name of Cindy Jefferies, but she has recently turned her hand to writing novels for adults, of which The Outrageous Fortune of Abel Morgan was her first. It was the title and cover that caught my attention at first, then when I read what the book was about I thought it sounded like something I was almost certain to enjoy.

The story begins in 1660, with Christopher Morgan returning to England following the restoration of Charles II, having spent several years in exile with the others who fought on the side of the Royalists in England’s recent civil war. Christopher no longer has any interest in taking his place at court and intends to start a new life for himself and his family as owners of the wonderfully named Rumfustian Inn in the village of Dario, but his dreams are destroyed when his beloved wife dies in childbirth. Sinking into depression, he is sustained only by his relationship with his baby son, Abel, whom he raises alone with the help of the servants.

As the years go by, the two become closer than ever, but when Christopher makes an enemy of a local smuggler, he and Abel both pay a terrible price. Abel disappears while out riding his pony and Christopher’s only clue to his whereabouts is a mysterious map of Constantinople. Does this show where Abel has been taken? Christopher isn’t sure, but he’s determined to do whatever it takes to find his son. While he continues to search, however, Abel himself is having adventures of his own…

The Outrageous Fortune of Abel Morgan is best described as a good old-fashioned adventure story – a sort of cross between Robert Louis Stevenson’s Treasure Island and Daphne du Maurier’s Jamaica Inn. With smugglers, secret tunnels, sinister villains, pirate ships and action on the high seas, it’s a fun and entertaining read – yet I didn’t love it as much as I felt I should have done. While I had a lot of sympathy for Christopher, I never warmed to Abel at all; I found him quite selfish and some of his actions towards the end of the book made me actively dislike him. As half of the novel was narrated from his perspective, this was definitely a problem for me. I was also confused by the storyline which plays out in Constantinople as it seems to have very little bearing on the rest of the story and a villain introduced in this section didn’t have the impact I expected him to have.

Still, I was kept in suspense throughout the novel, wondering whether Christopher and Abel would ever meet again. The main theme of the love between father and son is handled with sensitivity and emotion and I had tears in my eyes several times towards the end of the book – which I always think is a sign that an author is doing something right! I would be happy to read more of Cynthia Jefferies’ adult novels; her new one, The Honourable Life of Thomas Chayne, is out now.

Thanks to Allison & Busby for providing a copy of this book for review via NetGalley.