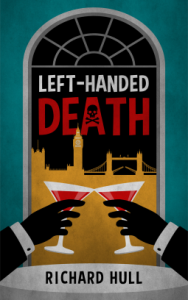 I loved Richard Hull’s The Murder of My Aunt – it was one of the best books I read last year – but when I tried another of his classic crime novels, And Death Came Too, I was disappointed to find that it was a much more conventional murder mystery without the humour and originality I had expected based on my first experience. Left-Handed Death is my third Hull novel and I’m pleased to report that it’s another good one – not in the same class as The Murder of My Aunt, but much better than And Death Came Too.

This book was published in 1946, but is set slightly earlier, just before the end of World War II. It begins with Guy Reeves, one of the two directors of the Shergold Engineering Company, returning to his office after lunch and making a shocking confession to his co-director, Arthur Shergold: he has just murdered Barry Foster, a civil servant who has been investigating the company’s finances. Foster may have been on the point of revealing corruption within the company, something which matters to the Ministry he works for because the Shergold Company have been supplying government contracts throughout the war.

Reeves describes his actions of the afternoon to his partner, finishing with a detailed account of how he carried out the murder, then he heads to Scotland Yard where he repeats his confession to the police. Inspector Hardwick doesn’t believe him – why would somebody voluntarily admit to murder? – but he sends his men to Foster’s home where they discover that Foster is indeed dead and that it’s entirely possible that the murder could have taken place exactly as Reeves has described it. There seems little reason to investigate further, but Hardwick still has his doubts and sets out to prove that Reeves is innocent.

“I like my murders to start at the beginning with the corpse and go on to the end with the conviction. But when you start in the middle with the confession – well, all I can say is that it’s all wrong!”

As I continued to read, I started to form my own theory about what was happening and I was able to predict the solution before it was revealed, but I still enjoyed watching Hardwick and his fellow detectives sorting through the clues, looking for alibis, speaking to witnesses and gathering medical evidence. I thought the ending did let the rest of the book down slightly, though – surely there was room for one or two more twists!

As well as being an entertaining murder mystery, I found this book interesting because of the time period in which it is set. The story takes place right at the end of the war and that has an impact on the lives of the characters and on just about everything that happens in the novel. Guy Reeves’ description of the lavish meal he and Foster ate on the day of the murder, for example, provokes disapproval at a time when rationing is in place; the war makes it difficult to get hold of a doctor to examine the murdered man; Cynthia Trent, who works as a secretary at the Shergold Company, takes a walk in the countryside past an Italian prisoner-of-war camp; and Reeves himself has suffered an injury while serving in the army which has implications for the way in which the murder is carried out.

I will continue to read Richard Hull’s books in the hope that the others will be at least as good as this one, if not as good as The Murder of My Aunt. I suspect I probably started with his best book, but that doesn’t mean the others aren’t worth reading!