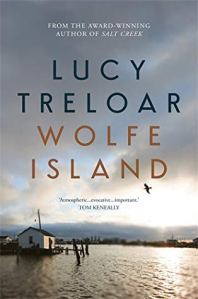 This month the book Kate has chosen as our starting point is Wolfe Island by Lucy Treloar. I haven’t read it, but this is what Goodreads tells us it’s about:

“For years Kitty Hawke has lived alone on Wolfe Island, witness to the island’s erosion and clinging to the ghosts of her past. Her work as a sculptor and her wolfdog Girl are enough. News of mainland turmoil is as distant as myth until refugees from that world arrive: her granddaughter Cat, and Luis and Alejandra, a brother and sister escaping persecution. When threats from the mainland draw closer, they are forced to flee for their lives. They travel north through winter, a journey during which Kitty must decide what she will do to protect the people she loves.”

Although I haven’t read that book and I don’t think I’m particularly interested in reading it, I have read another one by Lucy Treloar – Salt Creek (1), which is set in the 19th century and tells the story of a family who move from Adelaide to the Coorong region of South Australia after falling on hard times.

Taking South Australia as my next link, The Boy with Blue Trousers by Carol Jones (2) is a novel divided between two narratives: one following a Chinese girl who is forced to leave her home in the Pearl River Delta and travel to the goldfields of Australia; the other following an Englishwoman working as a governess in Robetown, South Australia.

Thinking of other books with ‘blue’ in the title, the first one that comes to mind is an obvious one: Nancy Bilyeau’s historical thriller The Blue (3). Set during the Seven Years War of 1756 to 1763, a Huguenot woman working at the Derby Porcelain Works becomes caught up in a race to find a rare and beautiful shade of blue.

The idea of searching for a colour reminds me of The Book of Fires by Jane Borodale (4), in which a young woman becomes an apprentice to a fireworks maker and helps him to create new colours for his fireworks. The name of the young woman is Agnes and that leads me to my next book…

Agnes Grey (5) Anne Brontë’s semi-autobiographical novel based on her own experiences as a governess. Anne is often (very unfairly in my opinion) overshadowed by her sisters Emily and Charlotte, but I highly recommend reading her books; The Tenant of Wildfell Hall is particularly good.

Another author in the shadow of a more famous sibling was Angela du Maurier, who when she was mistaken for Daphne would reply, ‘I’m only the sister’. This brings my chain to an end with Daphne du Maurier and Her Sisters: The Hidden Lives of Piffy, Bird and Bing by Jane Dunn (6) – a biography of Angela, Daphne and the youngest du Maurier sister, Jeanne, who was an artist.

And that’s my chain for this month! My links included Australia, the word ‘blue’, experiments with colours, heroines called Agnes and sisters who are authors. Next month, we are beginning with Stasiland by Anna Funder.

27 thoughts on “Six Degrees of Separation: From Wolfe Island to Daphne du Maurier and Her Sisters”