I usually love Sebastian Barry’s books, but his last one – Days Without End – was the first one I’ve read that I haven’t particularly enjoyed. Ironically, it also seems to be one of his most popular and successful books! When I saw that he had written a sequel, I wasn’t sure whether to read it, but as it promised to tell the story of Winona, the one character from Days Without End who did interest me, I thought I would try it – and I’m pleased to say that I was able to connect with this book in a way that I didn’t with the previous one.

Those of you who have read Days Without End will probably remember that Winona was the Lakota orphan rescued by Thomas McNulty and John Cole. In A Thousand Moons, set in the 1870s, we discover that Winona, now a young woman, is still living with Thomas and John on Lige Magan’s tobacco farm in Tennessee. Despite the love and support she receives from the men who have adopted her and the opportunities she has been given – including a job in a lawyer’s office – Winona is aware that she has still not been fully accepted by the wider community and that most people see her as ‘nothing but an Injun’ whose life is worth less than that of a white person.

Near the beginning of the novel we learn that Winona has been raped and the blame has fallen on Jas Jonski, a young Polish immigrant who swears he loves Winona and wants to marry her. Winona herself has no memory of the incident, something which distresses her as she has no idea whether Jonski is being wrongly accused or not. At around the same time, Tennyson Bouguereau, a former slave living on the farm, is also attacked and violently beaten – and again, it is not clear who the culprits are. The rest of the book, narrated by Winona herself, describes how she slowly uncovers the truth of her own assault and Tennyson’s.

I’m not sure why I liked this book so much more than Days Without End. Both books are beautifully written, as I have come to expect from Sebastian Barry, and obviously they feature some of the same characters and have a similar setting. I think the difference is that the first book, which was narrated by Thomas McNulty, was more of a ‘western’ with a focus on things like life in the army, shooting buffalo and fighting the Sioux. This book, in contrast, is more domestic, concerned with how the characters are getting on with their daily lives in the aftermath of the recent Civil War and how they are coping with the racial tensions left unresolved within their society. That, and the fact that I felt a stronger emotional connection with Winona than I did with Thomas, are the only reasons I can think of for my very different reactions to the two novels.

I also loved all the little insights Winona gives us into her early childhood with the Lakota tribe and what she remembers of their culture, traditions and stories, including her mother’s belief that ‘If you walked far enough, you could find the people still living who had lived in the long ago. A thousand moons all at once.’ 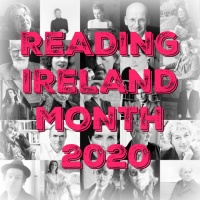 Although, unlike many of Sebastian Barry’s books, this one is not set in Ireland, he is an Irish author and I am counting A Thousand Moons towards Cathy at 746 Books’ Reading Ireland Month. I still have three of Barry’s earlier novels to read: A Long Long Way, The Whereabouts of Eneas McNulty and Annie Dunne. If you’ve read any of them, which one do you think I should read next?

Thanks to Faber & Faber for providing a copy of this book for review via NetGalley.

16 thoughts on “A Thousand Moons by Sebastian Barry”