Following the announcement of the 2020 longlist for the Walter Scott Prize for Historical Fiction earlier this month, the shortlist has been revealed today. As you may know, I am currently working my way through all of the shortlisted titles for this prize since it began in 2010 (you can see my progress here), so I will be trying to read all of the books below eventually. There are six books on this year’s list and here they are: 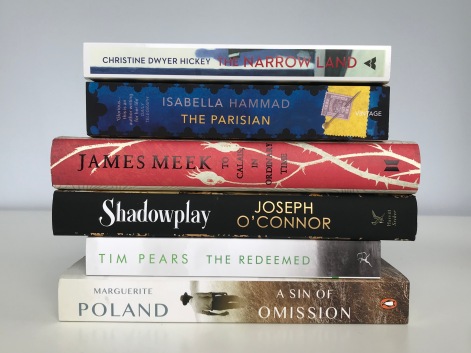 “1950: late summer season on Cape Cod. Michael, a ten-year-old boy, is spending the summer with Richie and his glamorous but troubled mother. Left to their own devices, the boys meet a couple living nearby – the artists Jo and Edward Hopper – and an unlikely friendship is forged.

She, volatile, passionate and often irrational, suffers bouts of obsessive sexual jealousy. He, withdrawn and unwell, depressed by his inability to work, becomes besotted by Richie’s frail and beautiful Aunt Katherine who has not long to live – an infatuation he shares with young Michael.

A novel of loneliness and regret, the legacy of World War II and the ever-changing concept of the American Dream.”

The Parisian by Isabella Hammad

“As the First World War shatters families, destroys friendships and kills lovers, a young Palestinian dreamer sets out to find himself.

Midhat Kamal picks his way across a fractured world, from the shifting politics of the Middle East to the dinner tables of Montpellier and a newly tumultuous Paris. He discovers that everything is fragile: love turns to loss, friends become enemies and everyone is looking for a place to belong.

Isabella Hammad delicately unpicks the tangled politics and personal tragedies of a turbulent era – the Palestinian struggle for independence from the British Mandate, the strife of the early twentieth century and the looming shadow of the Second World War. An intensely human story amidst a global conflict, The Parisian is historical fiction with a remarkable contemporary voice.”

To Calais, in Ordinary Time by James Meek

“England, 1348. A gentlewoman is fleeing an odious arranged marriage, a Scottish proctor is returning home to Avignon and a handsome young ploughman in search of adventure is on his way to volunteer with a company of archers. All come together on the road to Calais.

Coming in their direction from across the Channel is the Black Death, the plague that will wipe out half of the population of Northern Europe. As the journey unfolds, overshadowed by the archers’ past misdeeds and clerical warnings of the imminent end of the world, the wayfarers must confront the nature of their loves and desires.

A tremendous feat of language and empathy, it summons a medieval world that is at once uncannily plausible, utterly alien and eerily reflective of our own. James Meek’s extraordinary To Calais, In Ordinary Time is a novel about love, class, faith, loss, gender and desire—set against one of the biggest cataclysms of human history.”

“1878: The Lyceum Theatre, London. Three extraordinary people begin their life together, a life that will be full of drama, transformation, passionate and painful devotion to art and to one another. Henry Irving, the Chief, is the volcanic leading man and impresario; Ellen Terry is the most lauded and desired actress of her generation, outspoken and generous of heart; and ever following along behind them in the shadows is the unremarkable theatre manager, Bram Stoker.

Fresh from life in Dublin as a clerk, Bram may seem the least colourful of the trio but he is wrestling with dark demons in a new city, in a new marriage, and with his own literary aspirations. As he walks the London streets at night, streets haunted by the Ripper and the gossip which swirls around his friend Oscar Wilde, he finds new inspiration. But the Chief is determined that nothing will get in the way of his manager’s devotion to the Lyceum and to himself. And both men are enchanted by the beauty and boldness of the elusive Ellen.

This exceptional novel explores the complexities of love that stands dangerously outside social convention, the restlessness of creativity, and the experiences that led to Dracula, the most iconic supernatural tale of all time.”

The Redeemed by Tim Pears

“It is 1916. The world has gone to war, and young Leo Sercombe, hauling coal aboard the HMS Queen Mary, is a long way from home. The wild, unchanging West Country roads of his boyhood seem very far away from life aboard a battlecruiser, a universe of well-oiled steel, of smoke and spray and sweat, where death seems never more than a heartbeat away.

Skimming through those West Country roads on her motorcycle, Lottie Prideaux defies the expectations of her class and sex as she covertly studies to be a vet. But the steady rhythms of Lottie’s practice, her comings and goings between her neighbours and their animals, will be blown apart by a violent act of betrayal, and a devastating loss.

In a world torn asunder by war, everything dances in flux: how can the old ways life survive, and how can the future be imagined, in the face of such unimaginable change? How can Leo, lost and wandering in the strange and brave new world, ever hope to find his way home?

The final instalment in Tim Pears’s exquisite West Country Trilogy, The Redeemed is a timeless, stirring and exquisitely wrought story of love, loss and destiny fulfilled, and a bittersweet elegy to a lost world.”

A Sin of Omission by Marguerite Poland

“In the Eastern Cape, Stephen (Malusi) Mzamane, a young Anglican priest, must journey to his mother’s rural home to inform her of his elder brother’s death.

First educated at the Native College in Grahamstown, Stephen was sent to England in 1869 for training at the Missionary College in Canterbury. But on his return to South Africa, relegated to a dilapidated mission near Fort Beaufort, he had to confront not only the prejudices of a colonial society but the discrimination within the Church itself.

Conflicted between his loyalties to the amaNgqika people, for whom his brother fought, and the colonial cause he as Reverend Mzamane is expected to uphold, Stephen’s journey to his mother’s home proves decisive in resolving the contradictions that tear at his heart.”

* All blurbs taken from Goodreads.

What do you think? Have you read any of these? I have read one of them – To Calais, in Ordinary Time – and although it wasn’t really for me, I am not at all surprised to see it on the shortlist and won’t be surprised if it goes on to win the overall prize. I’m pleased to see Shadowplay and The Narrow Land on there too, as they are probably the books that appealed to me most from the longlist.

The winner is usually announced at the Borders Book Festival in June but with the current situation this year’s festival has been postponed, so we will have to wait and see how and when the 2020 announcement takes place!