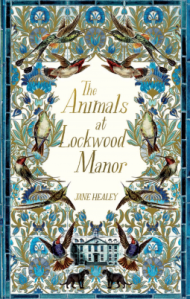 With a creepy country house setting and hints of ghosts, madness and family secrets, The Animals at Lockwood Manor has the sort of plot I would associate more with the Victorian period – and there are certainly some allusions to books like Jane Eyre, Wuthering Heights and The Woman in White here – but the story is actually set during World War II, which makes an interesting change.

Our narrator, thirty-year-old Hetty Cartwright, works as a curator at a natural history museum in London. With the outbreak of war, a decision is made to remove the museum’s exhibits from the city and transport them to the safety of the countryside. Hetty is given the task of evacuating a collection of stuffed mammals to Lockwood Manor and staying there to take care of them for the duration of the war. As a single woman with no close family or friends, Hetty has devoted her life to her work and is looking forward to being director of her own little museum at Lockwood Manor – it’s a chance to prove herself in a male-dominated field and show that she is the equal of any man.

Once she arrives at the Manor and gets the animals arranged in the rooms, however, she begins to worry that she has taken on more than she can handle. Although Lord Lockwood has agreed to house the collection under his roof, he makes it clear that he is not happy with Hetty’s presence and believes women should be seen and not heard. As if his bullying isn’t enough, Hetty is disconcerted to find that some of the animals seem to be moving from room to room during the night, while others disappear entirely. Afraid and alone, Hetty turns to the only person in the household who offers any friendship and support: Lucy, Lord Lockwood’s daughter. But Lucy, who is haunted by strange dreams and tales of a ghostly woman dressed in white, has enough problems of her own!

This is Jane Healey’s first novel (she is not to be confused with the American author of the same name) and I found a lot to enjoy. First, there’s the atmosphere; the story is set almost entirely within the confines of Lockwood Manor, with a growing sense of mystery and tension as Hetty tells herself that there must be a logical explanation for what is happening to the animals but can’t quite shake off the feeling that they are somehow moving around by themselves. Then there are the social history aspects of the story, particularly the insights into how the role of women changed during the war; for example, we are told that Hetty would never have been promoted to keeper of the mammal collection if so many of the male museum workers hadn’t enlisted with the army, which is why she is so determined to make the most of the opportunity she has been given.

But I had one or two problems with the book too. I thought the pace felt uneven; very slow at the beginning and for much of the first half, with most of the action packed into the last few chapters. And if you took away the animals and found a different reason for Hetty’s arrival at Lockwood Manor, the story would be very similar to any number of other recent historical novels inspired by those same Victorian novels I mentioned in my opening paragraph above. Even the romance which develops in the middle of the novel was predictable. I suppose it was too much to be hoped for that Hetty could have been single just because she wanted to be single!

Overall, though, there was more to like than to dislike and I would be happy to read more books by Jane Healey in the future.

Thanks to Mantle for providing a copy of this book for review via NetGalley.

14 thoughts on “The Animals at Lockwood Manor by Jane Healey”