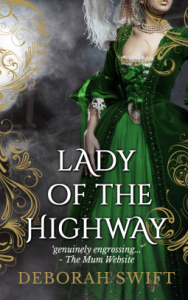 This is the third book in Deborah Swift’s Highway trilogy set in 17th century England in the aftermath of the civil war. All three novels revolve around the character of Kate Fanshawe, who is loosely based on the legendary highwaywoman known as ‘The Wicked Lady’. The books do all stand alone to a certain extent, but reading them in order makes much more sense. The first volume, Shadow on the Highway, is written from the perspective of Abigail Chaplin, a maid in Kate’s household, while the second, Spirit of the Highway, is the story of Abigail’s brother, Ralph, who becomes Kate’s lover. Now, in Lady of the Highway, we finally get to hear Kate’s own point of view.

Following the events of the previous two novels, poor Kate has very little left in her life. Her husband, Thomas Fanshawe, and her cruel, overbearing stepfather, Simon, are still away from home, having been on the losing side in the recent wars – and although Kate is not too unhappy about that, she is struggling to continue with life at Markyate Manor on her own. Impoverished and desperate, she can expect little support from her neighbours, who have no sympathy for a woman from a family of defeated Royalists. Her beloved Ralph is gone, although she still feels his presence all around her, and to make matters worse, Abigail is ill and there is no money for medicine. When an attempt to seek help from her friends in the Digger community doesn’t go quite as planned, it seems that Kate has no choice but to take to the highways again…

The Highway novels are aimed at young adults but have plenty to offer an adult reader too. This book is as enjoyable and interesting as the previous two, although it’s also quite relentlessly sad and tragic; nothing at all seems to go right for Kate and she meets with rejection, anger and hostility everywhere she turns. Sometimes she deserves it – she is not the most loveable of characters and, for me, Abigail is the real heroine of the series – but often the cruelty she receives seems unnecessary and disproportionate. I think that’s maybe one of the areas where the book lacks the depth I would expect in an adult novel; there are good characters and there are bad characters but not much in between and no real explanation as to why the villains are so villainous.

Despite the titles of the books, the action we see on the highway – when Kate, out of desperation, goes out armed with her pistols in search of rich travellers – is only one small aspect of the story. Other topics that have been covered in the previous two novels and developed further in this one include the work of the Diggers, who believe that land should belong to everyone and not be bought, sold or enclosed, and what it is like to be a deaf person living in the 17th century. There’s a little bit of romance in this book too, not for Kate but for Abigail – and although I found it very predictable, I was pleased with the outcome! I liked the way the story was resolved for Kate too…both a sad and a happy ending at the same time.

I enjoyed all three books in this trilogy, including this one. I thought it was a good idea to use a different narrator for each book – first Abigail, then Ralph and finally Kate – as it meant they could each tell the part of the story most relevant to them and give three different perspectives on the same period of history. If you read these books hoping to learn more about the real Katherine Fanshawe (or Ferrers, as she is often known by her maiden name), however, bear in mind that the details of the legend are very hazy – it is not clear how and when she died, for example, and there is no evidence that Ralph actually existed, although his name is usually linked with Kate’s. The historical notes at the end of each novel give some guidance and for a different approach to the ‘Wicked Lady’ legend you may like to read The Silvered Heart by Katherine Clements too.

10 thoughts on “Lady of the Highway by Deborah Swift”