Welcome to my monthly post on all things historical fiction.

The winner of this year’s Walter Scott Prize for Historical Fiction was announced on Friday: The Narrow Land by Christine Dwyer Hickey. Unfortunately I haven’t had time to read all of the shortlisted titles (I posted the shortlist back in March) but I hope to catch up with them eventually. The Narrow Land is about the American artists Edward and Jo Hopper and the summer they spent in Cape Cod in 1950, so I thought it would be interesting this month to look at other historical fiction novels which feature famous artists. 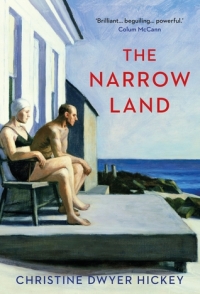 Most recently, I have read Mrs Whistler by Matthew Plampin, which explores the relationship between James Abbott McNeill Whistler and his model and muse, Maud Franklin. I’m currently working through a backlog of books I need to review, so you will be able to read my thoughts on that one eventually!

Thinking of others I’ve read, the first that comes to mind is Girl With a Pearl Earring by Tracy Chevalier. Set in the Netherlands in the 1660s, it tells the story of a maid in the household of the artist Johannes Vermeer. There’s also The Master of Bruges by Terence Morgan, a fictional memoir of the 15th century artist, Hans Memling.

Novels about early female artists are particularly interesting as they have received so little attention throughout history. The Creation of Eve by Lynn Cullen is a book about the Italian Renaissance painter Sofonisba Anguissola, who spent many years painting portraits at the Spanish court, while Michelle Diener’s In A Treacherous Court features Susanna Horenbout, a Flemish artist who worked as an illuminator at the court of Henry VIII. And although she’s not the main focus of the novel, Sisters of Treason by Elizabeth Fremantle is written partly from the perspective of Levina Teerlinc, another female artist working during the Tudor period and best known as a painter of miniatures.

I’m sure I must have read other books about artists but these are all I can think of at the moment (I have read plenty of books with fictional artists, but that would be a topic for a separate post), so now it’s your turn. Have you read any fiction about the lives and work of artists – of any nationality and from any time period? I would love some recommendations.

30 thoughts on “Historical Musings #61: Art through the ages”