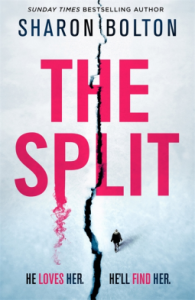 Sharon Bolton is an author whose books I always enjoy, even though I don’t read a lot of contemporary crime fiction these days. I had expected her next book to be the promised sequel to 2018’s The Craftsman, but I was quite happy to find that The Split was a standalone thriller as her earlier standalones such as Sacrifice, Awakening and Little Black Lies have been some of my favourites.

The Split takes us to South Georgia, a remote and inhospitable island in the southern Atlantic Ocean where twenty-eight-year-old Felicity Lloyd is working as a glaciologist for the British Antarctic Survey. It’s fascinating work and Felicity knows she has been given a wonderful opportunity, but she also has another reason for accepting the job – a chance to put as much distance as possible between herself and Freddie, a man from her past of whom she is still afraid. However, it seems that even here, on the other side of the world, she has been unable to escape. Freddie is coming for her, on the last tourist boat of the summer, and has sent her a letter that fills her with fear:

My dearest Felicity,
Finally, I’ve found you. South Georgia? Wow! Know, my darling, that there is nowhere you can go that I won’t follow –

Who exactly is Freddie and what does he want with Felicity? We find out later in the book, but first we have to go back nine months in time to Cambridge where a series of murders has been committed. Felicity’s connection, if any, with these murders is unclear; all we do know is that she is still haunted by some previous traumatic experiences and has been attending sessions with a therapist. Eventually everything will be revealed, but before we get to that point there are plenty of the twists and turns that are to be expected from a Sharon Bolton novel.

When I first started to read this book it was the South Georgia setting that initially appealed to me, but although we are given some beautiful descriptions of the landscape and the cold, harsh environment, I found I wasn’t being drawn into the story as much as I would have liked. The details of whaling operations and Felicity’s research into glaciers didn’t really interest me – and being thrown straight into the middle of the story with no idea of who anybody was or what was happening didn’t help, even though I understood the reasons for that structure. It wasn’t until the action switched to Cambridge and the backgrounds of Felicity and the other characters began to be explored that I was able to settle into the novel and enjoy it.

I can’t really tell you much about the Cambridge section of the book as it would be too difficult to avoid spoilers, but it quickly becomes clear that we can’t rely on everything Felicity tells us because she has been left so badly scarred by her past experiences. Joe, her therapist, who is one of the other main characters whose perspective we see, has suffered his own recent traumas and it’s obvious that there is also more going on in his life than we are aware of at first. The truth about these two characters – and others, including Bamber, a wild and angry young woman who is very protective of Felicity, and Sean, a mysterious figure who stalks the streets of Cambridge at night – unfolds slowly, with everything coming together when we return to South Georgia in the dramatic final third of the novel. However, I found most of the twists quite easy to guess, which is unusual for a Sharon Bolton book and a bit disappointing.

This hasn’t become one of my favourites, then, but I did enjoy it after a slow start. I must find time to read Blood Harvest, the only one of her previous books I still haven’t read!

Thanks to Trapeze for providing a copy of this book for review via NetGalley.

14 thoughts on “The Split by Sharon Bolton”