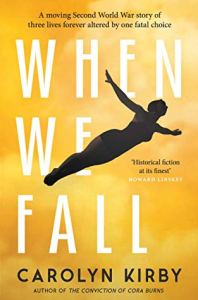 Carolyn Kirby’s new novel, set during World War II, was published in May to coincide with the 75th anniversary of VE day; unfortunately, I was in the middle of a lockdown-induced reading slump at that time, but I added the book to my 20 Books of Summer list to ensure that I would still read it sooner rather than later.

When We Fall, set in 1943, follows the stories of two women leading very different lives but both playing their part in the war effort. First, we are introduced to Valerie – Vee – Katchatourian, a British pilot whose job is to fly planes between airfields for the Air Transport Auxiliary. Forced to make an emergency landing due to fog one day, Vee encounters a Polish airman, Flight Sergeant Stefan Bergel of 302 Squadron. It’s only a brief meeting, but Stefan makes a big impression on Vee and she finds that she is unable to forget about him.

Meanwhile, in the city of Poznań in occupied Poland, Ewa Hartman is helping her father to run his guest house. At the same time as offering hospitality to German officers, Ewa is carrying out undercover work for the AK (the Polish resistance) – a dangerous thing to do, which becomes even more dangerous when she begins to attract the attention of a high-ranking German guest, SS-Obersturmführer Heinrich Beck. Ewa becomes close to Beck, but in her heart she remains loyal to her former lover, Stefan Bergel, whom she has not seen since he became a prisoner of the Soviet army a few years earlier.

Stefan provides the link between Ewa and Vee, but who is he really and where do his true allegiances lie? He is a complex and enigmatic character whose motives and loyalties are never clear, even to the reader who sees both sides of the story, unlike Ewa and Vee who see only their own. This, along with Ewa’s support for the resistance and the dangers of Vee’s work as a pilot, keeps the novel filled with tension and suspense until the end as there is no guarantee that any or all of our characters are going to survive the war.

The novel switches between the two storylines, although Vee’s almost disappears for a while in the middle of the book while most of the action is taking place in Poland. I liked both characters and both settings, but Ewa’s story was the most compelling, I thought. In all of my reading about the war, I don’t seem to have come across many books that describe life in occupied Poland, so I found it very interesting to read about the challenges Ewa faced on a daily basis. With the Nazi occupiers in the process of renaming streets and towns to make them sound more ‘German’ – Poznan becomes Posen, for example – Ewa must learn to respond to the German form of her own name (Eva), to avoid lapsing into her native language, and to come to terms with the local synagogue being converted into a swimming pool.

Names are also important for Vee, who was born in England but whose Armenian surname makes her the subject of prejudice and suspicion, as well as the prejudice she already experiences as a female aviator – even though the ATA was notable for paying women the same as men, Vee senses that she is not always considered an equal. Although I’m not really interested in aviation, Vee’s enthusiasm for her work as a pilot and for the different types of planes she is asked to fly comes across strongly.

Finally, I should mention the Katyn Massacre, a wartime atrocity which marked its 80th anniversary this year and casts its shadow over the lives of the characters in this book. I won’t say too much about it but will leave you to find out how it affects Stefan, Ewa and Vee if you decide to read When We Fall – which I do recommend, as it’s such an interesting and moving novel, very different from Carolyn Kirby’s previous book, The Conviction of Cora Burns, which I also enjoyed!

Thanks to No Exit Press for providing a copy of this book for review via NetGalley.

This is book 4/20 of my 20 Books of Summer. I am actually doing better with this than it seems – I have also read another four books from the list and just need to finish writing my reviews!

11 thoughts on “When We Fall by Carolyn Kirby”