I usually try to write about each book I read as soon as possible after finishing it, but sometimes that doesn’t happen and I find myself with a backlog of reviews to write for books read earlier in the year. Here are three historical novels that I read a few months ago and haven’t got around to writing about until now. 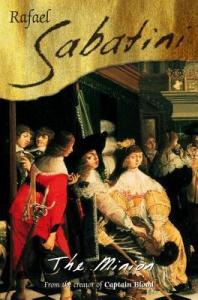 I was drawn to The Minion (1930) both because I’ve loved some of the other Rafael Sabatini books I’ve read and because it is a fictional account of the Thomas Overbury Scandal, a 17th century murder case I’ve previously read about in The Poison Bed by EC Fremantle and The King’s Favourite by Marjorie Bowen. Set during the reign of James I of England and VI of Scotland, the novel follows the story of Robert Carr, a young man who becomes a favourite of the king. The ambitious Earl of Northampton sees a chance to get closer to the throne by encouraging his great-niece, Frances Howard, to begin an affair with Carr, but the romance is opposed by Carr’s friend, Thomas Overbury. When Overbury is found dead in the Tower of London, suspicion falls on Carr and Frances.

As a fan of Sabatini, I have to confess I didn’t really like this particular book very much. Unlike the other novels of his I’ve read that have mainly fictional characters and storylines, this one is based very closely on real history and I think maybe he felt too constrained by historical fact to be able to create a compelling, entertaining story like his others. The characters seemed quite lifeless and the writing felt a bit dry – not really his usual style at all. Having said that, the history on which it is based is fascinating and Sabatini makes no secret of how he feels about the petty rivalries of the Jacobean court. It’s still an interesting read, if not a great example of Sabatini’s work.

If you want to know more about the Thomas Overbury affair, try the Fremantle novel instead – and if you’re new to Sabatini, start with Scaramouche! 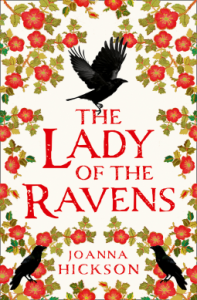 Joanna Hickson has previously written several novels set during the Wars of the Roses, one of my favourite periods of English history. Her latest book, The Lady of the Ravens (2020), opens just after the final major battle in that conflict – the Battle of Bosworth, which resulted in Henry Tudor taking the throne as King Henry VII. This novel looks at the events of the early part of Henry’s reign from the perspective of Joan Vaux, lady-in-waiting to Henry’s queen, Elizabeth of York. We see how precarious Henry’s grip on the throne is, with challenges from various Yorkist pretenders, and the steps he takes to deal with these threats, and we are given some glimpses of his children, including Prince Arthur, his eldest son who is betrothed to Katherine of Aragon, and the future Henry VIII, seen here as a charming, confident young child, already popular with his father’s subjects.

Joan herself has very little, if any, direct involvement in the political intrigues of the court, which perhaps makes the story less exciting than it could have been, but she does form a strong bond with Elizabeth, bringing her close to the lives of the royal family. Joan’s own family life is also explored; I don’t know how historically accurate the book is regarding her personal relationships, but the fictional Joan appears to have been quite fortunate in her marriage to Sir Richard Guildford. It might not exactly be love at first sight, but she and Richard soon learn to get along with each other and, for an arranged marriage in the 15th century, it’s not an unhappy one. As for the ‘ravens’ of the title, they are the birds that live at the Tower of London; as legend has it, if the ravens ever leave the Tower, the kingdom will fall, so Joan, who has become fascinated by the birds, does her best to protect them from those who wish to do them harm.

I didn’t find this quite as interesting as Joanna Hickson’s previous book, The Tudor Crown, maybe because that one was about Henry Tudor and took us straight to the heart of the action, whereas the choice of Joan as narrator of this book, as I’ve said, means a slower pace and a more domestic story. Still, I enjoyed it and was pleased to see that there’s going to be a sequel. 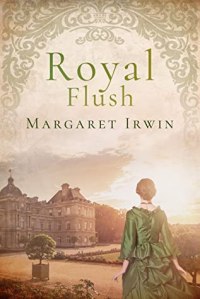 Having enjoyed some of Margaret Irwin’s other books, particularly the first two of her Elizabeth I trilogy (I must read the third one soon), I had high hopes for this one, about Charles II’s younger sister Henrietta – known as Minette. Royal Flush (1932) is a straightforward fictional retelling of Minette’s life, beginning with her exile in France as a child during the period of her father, Charles II’s, beheading and the rule of Oliver Cromwell as Lord Protector. Growing up at the French court, it is at first hoped that Minette will marry the young king of France, Louis XIV, but when another bride is chosen for Louis, Minette finds herself married off to his younger brother Philippe instead.

I won’t say any more about the plot as you will either already be familiar with Minette’s history or, if not, you won’t want me to spoil it for you. However, if you’re completely new to her story, be aware that the book is quite slow and detailed and possibly not the best starting point (although this is the first novel I’ve read specifically about Minette, I’ve come across her many times as a secondary character in books like Dumas’ Louise de la Vallière and Margaret Campbell Barnes’ Lady on the Coin and I found it very useful to have that little bit of prior knowledge about her). I do like Margaret Irwin’s writing and the old-fashioned charm of her novels, which have quite a different feel from most of the historical fiction being published today, but I think this is the weakest of her books that I’ve read so far.

Have you read any of these – or any other books by these authors?