I loved Stuart Turton’s first novel, The Seven Deaths of Evelyn Hardcastle, which I thought was one of the most original and unusual mystery novels I’ve ever read, so I had high hopes for his new book, The Devil and the Dark Water. However, although this is another complex and cleverly plotted novel, it has a very different structure, setting and feel, and didn’t impress me as much as the previous book did.

The Devil and the Dark Water opens in 1634 in Batavia (now Jakarta, Indonesia), an outpost of the United East India Company. The Dutch ship Saardam is about to set sail for Amsterdam, carrying a cargo of spices, a mysterious object known as The Folly – and a prisoner, Sammy Pipps, the world’s greatest detective. Nobody knows what crime Sammy is supposed to have committed, but his friend and bodyguard, Lieutenant Arent Hayes, has vowed to protect him during the journey and to prove him innocent if possible. As the passengers and crew prepare to embark, a leper wrapped in blood-stained rags appears on the dock and has time to place a curse on the ship before his body is consumed by flames.

The curse appears to set in motion a chain of eerie, unexplained events which begin to occur as soon as the ship sails out to sea. Is the Saardam really being haunted by the devil, Old Tom, or is a human being behind these sinister occurrences? With Sammy locked in a cell, it falls to Arent to investigate…but he is not the only person on the ship who is trying to solve the mystery. Sara Wessel, wife of the Governor General, is also determined to uncover the truth, with the help of her daughter, Lia, and her husband’s mistress, Creesjie.

This is a wonderfully atmospheric book, with a real sense of evil and foreboding, beginning in the first chapter with the leper’s curse – ‘Know that my master sails aboard the Saardam. He is the lord of hidden things; all desperate and dark things…’ – and continuing to build throughout the novel, with strange symbols appearing on the sails, a lantern that shines out at sea where no lantern should be, stories of witchfinders and burning villages, and a series of ‘unholy miracles’. I found it genuinely spooky and although the plot itself seemed to move along very slowly at times (I read it on my Kindle and hadn’t really appreciated what a long book it was), the atmosphere more than made up for it. The revelations at the end of the book also took me by surprise; I’d had my suspicions about one of the characters, but I certainly didn’t guess everything correctly!

There were things I liked, then, but the main problem I had with the book was that I never at any point felt fully immersed in the seventeenth century. There’s no real attempt to use language appropriate to the period, Sara and Lia are both modern women with modern attitudes, and the depiction of Sammy Pipps as a sort of Sherlock Holmes character whose cases had been written about (by Arent) for all the world to read seemed completely implausible. To be fair, Stuart Turton acknowledges in an author’s note at the end of the book that he ‘did his research, then threw away the bits that hindered the story’, but I personally prefer a story set in the past to actually feel historical – otherwise, why bother setting it in the past at all? If you’re not too bothered about historical accuracy and are just looking for a dark and atmospheric mystery novel, I’m sure you’ll find a lot to enjoy here, but I don’t think I was the right reader for this book.

Thanks to Raven Books for providing a copy of this book for review via NetGalley. 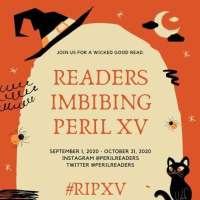 I am counting this book towards this year’s R.I.P. Challenge.