This month we are starting with Are You There God? It’s Me, Margaret by Judy Blume. I read a lot of Judy Blume books in my childhood/early teens and this is one I particularly remember – not every detail of the plot, but certain scenes and lines. Here’s the blurb:

Life isn’t easy for Margaret. She’s moved away from her childhood home, she’s starting a new school, finding new friends – and she’s convinced she’s not normal. For a start she hasn’t got a clue whether she wants to be Jewish like her father or Christian like her mother. Everyone else seems really sure of who they are. And, worst of all, she’s a ‘late developer’. She just knows that all her friends are going to need a bra before she does. It’s too embarrassing to talk to her parents about these things. So she talks to God instead – and waits for an answer…

For my first link I have chosen another novel with a question as the title: Madam, Will You Talk? by Mary Stewart (1). Of all of the Stewart suspense novels I’ve read, I think this one and Nine Coaches Waiting are two of the best. Published in 1955, this was her first novel and features some beautiful descriptions of the French countryside where our heroine, Charity, is trying to protect a thirteen-year-old boy whose father has been acquitted of murder.

In Madam, Will You Talk? the characters visit the Château d’If, made famous as the fortress off the coast of Marseille where Edmond Dantes is unjustly imprisoned near the beginning of The Count of Monte Cristo by Alexandre Dumas (2). If I was forced to choose my absolute favourite classic novel, this would probably be it. At nearly 1,000 pages it has an incredibly complex plot, but it can be described quite simply as a tale of revenge. This leads me to..

Hamlet, Revenge! by Michael Innes (3), the second in his series of novels featuring Inspector John Appleby. This Golden Age mystery from 1937 is set in an English country house where a guest is murdered during an amateur performance of Shakespeare’s Hamlet. It was the first of the Appleby novels I read and I enjoyed it so much I have since read another seven of them, although with more mixed results. 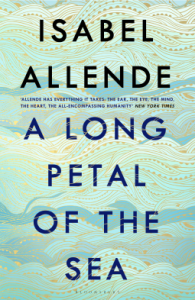 Another book in which the characters are staging a production of a Shakespeare play is Hag-Seed by Margaret Atwood (4). The play in this case is The Tempest and the novel follows Felix Phillips as he helps a group of prisoners to study the play and improve their literacy. I really enjoyed this book – it has so many different layers and even includes an element of revenge, so has a double link to book 3 in my chain!

Phillip Tempest is the name of the villain in Louisa May Alcott’s A Long Fatal Love Chase (5). Having only been familiar with Alcott as the author of Little Women and its sequels, I remember being very surprised to discover that she had written a book like this which has much more in common with the Victorian sensation novels of authors like Wilkie Collins than it does with Little Women!

To finish my chain, I’m linking to another book with a title beginning ‘A Long’ – A Long Petal of the Sea by Isabel Allende (6). I don’t think I’m ever going to be a fan of Allende’s writing; I have tried two of her books and didn’t love either of them, but they always sound interesting and I might be tempted to give her one more chance. A Long Petal of the Sea is set in Spain during the Civil War and then in Chile in the decades that follow.

And that’s my chain for this month! My links have included titles that are questions, the Château d’If, tales of revenge, Shakespeare’s plays, tempests and titles beginning with ‘A Long’.

In January we are starting with Hamnet by Maggie O’Farrell.

37 thoughts on “Six Degrees of Separation: From Are You There God? It’s Me, Margaret to A Long Petal of the Sea”