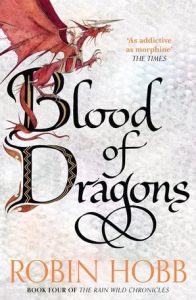 This is the fourth and final book in Robin Hobb’s Rain Wild Chronicles quartet and I can honestly say I don’t think I’ve ever been so pleased to come to the end of a series! Why have I persevered with it through four long books that I wasn’t particularly enjoying? Well, the series is part of the sixteen-volume Realm of the Elderlings sequence. I loved the first nine books (The Farseer, Liveship Traders and Tawny Man trilogies) and intend to read the last three, so didn’t feel that I could leave out these four in case I missed out on any details or plot points that turned out to be important later. Anyway, they’re not that bad – they’re just not as good as the earlier books I read by Hobb.

Blood of Dragons continues the story from the previous book, City of Dragons, with our band of young keepers and their dragons beginning to make their way into the deserted Elderling city of Kelsingra. Abandoned by the Elderlings in the aftermath of an earthquake many generations earlier, Kelsingra has been left in ruins but still holds magic within its stones. As the dragons replenish their strength and energy in the enormous hot baths, the keepers search for the source of the legendary Silver, the mysterious substance the dragons desperately need if they are ever to regain their full powers. Meanwhile, Tintaglia, the magnificent blue queen dragon, is trying to return home after being wounded in an attack by Chalcedean dragon-hunters – while in faraway Chalced itself, Selden Vestrit has found himself imprisoned by the Duke, who believes that Elderling blood is the next best thing to the dragon blood he needs to prolong his life.

As the last of the Rain Wild Chronicles, I thought this book brought the series to a satisfactory conclusion and I didn’t feel that anything significant had been left unresolved. Although these four novels seem very separate from the rest of the sequence (only a few shared characters with The Liveship Traders and hardly any overlap at all with the Farseer and Tawny Man books), I’m still pleased that I read them as they have added to the overall world-building and helped me to understand more about the relationship between dragons and Elderlings. I was particularly intrigued by the role of the Silver as a sort of life-force with magical properties; I’ve been remembering other references to silver in the earlier Hobb trilogies and trying to work out how all of this relates to the Skill. It was also interesting to see Rapskal taking on more and more of the characteristics of his long-ago counterpart Tellator as he spends more time immersing himself in Kelsingra’s memory stones.

Despite enjoying the magical elements of the story, however, I again struggled to really engage with any of the characters, something which has been a problem for me in all four novels. I became quite fond of a few of them (such as Alise, Sedric and Leftrin), but I felt that too much time was spent on the love triangle between Thymara, Rapskal and Tats, and on trying to sort all of the characters into romantic pairings, even the dragons. I did love the way Hest’s story ended, though! After a short break while I read other books, I will be ready to embark on the final trilogy, which begins with Fool’s Assassin, and am very much looking forward to rejoining Fitz and the Fool at last.

4 thoughts on “Blood of Dragons by Robin Hobb”