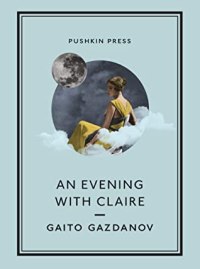 When An Evening with Claire was originally published in 1930, Russian author Gaito Gazdanov was living in Paris and hadn’t seen his home country for nearly a decade. This, his first novel, was a success for Gazdanov, bringing him to the attention of other émigré writers, and now that I’ve read it I can understand why. It’s not my usual sort of book but I was drawn to it because I’ve enjoyed other books which have been reissued by Pushkin Press recently and because, apart from Mikhail Bulgakov and Boris Pasternak, I can’t think of any other 20th century Russian authors that I’ve read. This new edition has an introduction by Bryan Karetnyk, who is also responsible for the excellent English translation, which I found very readable.

The novel opens with our narrator, Kolya, in Paris spending an evening with Claire while her husband is away from home. Although we know very little about Kolya’s relationship with Claire at this stage, we do learn that he first met her ten years ago and has been in love with her ever since. However, they have spent most of that time apart and have only now been reunited. Later that evening, while Claire is asleep, Kolya remembers their first meeting, along with many of the other significant moments in his past. As he continues to remember and reminisce, the story of his life begins to take shape: his childhood, his schooldays, his relationships with family members and his experiences during the Russian Revolution and the Civil War that followed.

We actually see very little of Claire herself and I never really felt that I knew her or understood the sort of person she was, but that didn’t matter too much because the main part of the novel concentrates on Kolya’s own history as it unfolds through a chain of memories. His love for the absent Claire is always there and can be seen as a symbol of hope as he dreams of meeting her again one day. I enjoyed the first half of the novel, which includes anecdotes from Kolya’s childhood and his education at a strict military school and gymnasium, but the second half is more interesting as he begins to remember his time serving with the White Army in the Russian Civil War. It all feels very autobiographical and although I don’t know much about Gaito Gazdanov, I’m sure he must have been drawing on some of his own personal experiences and feelings in the writing of this novel.

At just over 200 pages in this edition, An Evening with Claire is a very short novel, but I thought it was the right length for the story being told. In general, I prefer books with more plot and this one has very little, but while this might have been a problem for me in a longer novel, there was just enough here to interest me and hold my attention throughout those 200 pages. This may sound like a strange comparison, but I was reminded of one of my other recent reads, Goodbye Mr Chips, another short book published in the same decade in which a man is looking back on episodes from earlier in his life. They share a focus on the power of memory, recollections of better days and regret for a disappearing world – which are also the reasons why I think An Evening with Claire would have resonated so much with other Russian émigrés of the 1930s. I would be happy to read more by Gazdanov and I see there are four of his other books available in English from the same publisher.

Thanks to Pushkin Press for providing a copy of this book for review via NetGalley.