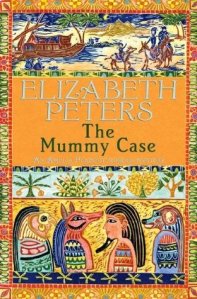 It’s been years since I last read an Amelia Peabody mystery and when I picked up The Mummy Case, the third in the series, I was concerned that I had left too big a gap between books. Luckily, this seems to be a series you can easily return to after a long absence as each book, at least so far, has worked as a standalone mystery.

The Mummy Case is set in 1894 and opens with married Egyptologists Amelia Peabody and Radcliffe Emerson at home in England planning their next trip to Egypt. Amelia dreams of exploring the pyramids of Dahshoor on this visit, but her hopes are shattered with the discovery that her husband has left it too late to submit their application and permission has already been granted to another archaeologist. Amelia and Emerson are offered Mazghunah instead – a barren and uninspiring site believed to be of little historical significance – and they reluctantly accept.

Despite their lack of enthusiasm, the expedition proves to be much more exciting than either of them had expected. Before they even reach their destination, they become caught up in the murder of an antiquities dealer in Cairo who is found dead in his own shop – and when they eventually arrive at Mazghunah, Amelia becomes convinced that somebody connected with the murder has followed them there. When a scrap of papyrus is stolen from their camp and an entire mummy case belonging to a visiting tourist also disappears, even Emerson has to agree that they have stumbled onto the trail of a clever and ruthless Master Criminal!

Unlike their first two mysteries (described in Crocodile on the Sandbank and The Curse of the Pharaohs), Amelia and Emerson have help in solving this one. For the first time, their young son Ramses has accompanied them on a dig and while he often proves to be more of a hindrance, getting into trouble at every opportunity, he also manages to appear at several crucial moments to save the day. Described as ‘catastrophically precocious’ by Amelia, he sounds more like a seventy-year-old professor with a speech impediment than a seven-year-old child and although I’ve been told that he improves as a character later in the series, in this book I found him extremely irritating. However, he’s clearly not meant to be taken too seriously – and to be fair, Amelia finds him irritating too:

The old woman’s cacodemonic laughter broke out again…”The wisdom of the Prophet is yours, great lady. Accept an old woman’s blessing. May you have many sons – many, many sons…”

The idea was so appalling I think I turned pale.

I enjoyed this book, despite Ramses, but I don’t think it was as strong as the previous two in the series. The plot seemed to meander all over the place and it was easy to lose sight of what the central mystery was that the characters were trying to solve. I do still love Amelia and Emerson, though – their good-natured bickering is always entertaining! It was also interesting to learn a little bit about Mazghunah and its disappointingly incomplete ‘pyramids’ and to meet the real-life archaeologist Jacques de Morgan – although seeing him only through Amelia’s eyes gives us a slightly biased impression as he is their rival and the man who is excavating the much more attractive site of Dahshoor!

I am looking forward to continuing with the fourth book in the series, Lion in the Valley. 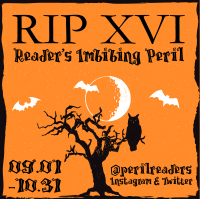 7 thoughts on “The Mummy Case by Elizabeth Peters”