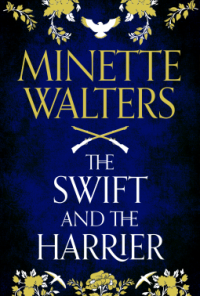 Minette Walters is better known as a crime writer, but she has made some forays into historical fiction in the last few years with The Last Hours and The Turn of Midnight, both set in England during the Black Death of 1348. Although I didn’t love either of those books, I did find them interesting, so I was keen to try her new one, The Swift and the Harrier, which is set in a completely different time period.

It’s 1642 and England is divided by civil war. On one side, the supporters of King Charles I; on the other, the Parliamentarians. In the middle, refusing to commit to either group, is Jayne Swift, a Dorset physician – although, as a woman, she is not allowed to officially give herself that title. The reason for her neutrality is that she values all human lives and doesn’t believe in denying treatment to someone in need just because they are the enemy. Most people, however, do take sides and Jayne finds that there are divisions within her own family.

Visiting her Puritan cousin in Dorchester one day, Jayne finds herself caught up in a crowd gathering to watch the hanging of some Catholic priests. She is rescued by a neighbour, Lady Alice Stickland, who introduces Jayne to her footman, William Harrier. Even on that first meeting, Jayne can’t help feeling that William doesn’t behave at all like a servant and, as their paths cross again and again, she begins to wonder who he really is. Footman, nobleman or soldier? Royalist or Parliamentarian? William is an enigma and Jayne must decide whether he can or cannot be trusted.

The Swift and the Harrier provides a wonderfully detailed depiction of life in the south of England during the Civil War. Real historical characters such as Oliver Cromwell and Prince Maurice (Charles I’s nephew) appear now and then and have a part to play in the story, but the main focus is on the ordinary people of Dorset and the impact the war has on them. I found the section of the book set during the Siege of Lyme Regis particularly interesting as I can’t remember reading much about it before, certainly not in as much detail as this.

However, I had difficulty believing in Jayne Swift as a 17th century woman. While I could maybe accept the premise that she had received some medical training from a male physician friend, I felt it was completely unrealistic that she would be able to practise her medicine so openly in the 1640s. The challenges she faces in getting the men she meets to accept her as a doctor seem to be very easily overcome and there is no sense of the danger Jayne would surely be in due to the witch hunts sweeping England at that time, when women with even a basic knowledge of healing and herbal remedies were at risk of accusations of witchcraft. Although I did find the plot quite gripping and enjoyed getting to know William Harrier and some of the secondary characters such as Alice Stickland, the fact that I found Jayne and her circumstances so unconvincing stopped me from becoming fully absorbed in the story.

Thanks to Allen & Unwin for providing a copy of this book for review via NetGalley.

15 thoughts on “The Swift and the Harrier by Minette Walters”