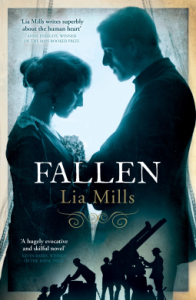 Liam Crilly is one of the ‘fallen’ – one of the many young men to be killed in action on the battlefields of World War I. When the tragic news reaches his family in Dublin, they each try to come to terms, in their different ways, with the terrible loss they have suffered. For his twin sister, Katie, losing Liam is like losing a part of herself and now all she has left of him are memories and the letters he sent home from the Western Front. Denied the chance to continue her education at university because her parents don’t believe it’s necessary, Katie finds solace in assisting Dorothy (Dote) Colcough, a friend and scholar, with the research for a new book she is writing.

Through Dote, Katie meets Hubie Wilson, an army officer who had fought with Liam in France and is now recovering at home after losing a hand. Katie is desperate to learn anything she can about Liam’s last days and Hubie is pleased to have found someone who is willing to listen to him talk about his traumatic experiences. Then, just as a relationship is beginning to form between the two of them, another violent conflict breaks out: the Easter Rising of 1916. Now, Katie’s priority is to keep her friends and family safe as armed insurrectionists take to the streets of Dublin with the aim of establishing an Irish Republic.

We actually learn very little about the Easter Rising itself – what lead to it, the politics behind it, how it ended or what the outcome was – and as this is not a subject I know much about myself, I was left feeling a bit lost and confused. However, I think that was probably intentional; the focus of the book is on the ordinary people of Dublin and how they coped with the violence going on around them in the city. Written from Katie’s point of view, she has a limited knowledge of what is happening behind the scenes, but describes to the reader the things she can see and hear for herself: the gunshots, the roadblocks, the looting of shops, the smashed windows and the fires burning in the streets. I couldn’t help thinking that she seems to move very easily from one part of the city to another, considering how dangerous it was supposed to be, but otherwise these sections of the novel feel vivid and real.

The personal side of the story was of less interest to me, which I think is because of the choice of Katie as narrator. I just didn’t find her a particularly engaging character; she’s a woman in her twenties, but her narrative voice makes her seem much younger – and I wasn’t really convinced by the romance with Hubie either. Some of the other characters appealed to me more, such as Liam’s grieving fiancée, Isobel, who feels shut out by the Crilly family after Liam’s death, and Katie’s new friends Dote and May, two unconventional women who are trying to live their lives the way they want to live them. I was sorry we didn’t spend more time with these characters, as I think their stories would have interested me more than Katie’s!

Fallen was selected as the One Dublin One Book choice for 2016, an initiative which encourages people to read a book connected with the Irish capital every April. I’m obviously very late with this one, but I can see why it was chosen, for the unusual perspective it offers on such an important event in Dublin and Ireland’s history.

2 thoughts on “Fallen by Lia Mills”