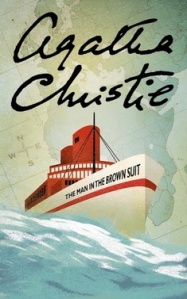 A new year means a new Agatha Christie reading challenge! After participating in all twelve monthly reads for Read Christie 2021, I’m not planning to do the same again this year – I do love Christie, but there are so many other authors I want to read too. However, I will still be dipping into Read Christie 2022 throughout the year whenever I’m tempted by the monthly theme. The topic for January is ‘A story inspired by Agatha’s travels’ and the suggested book is The Man in the Brown Suit, one that I hadn’t read before and that sounded quite appealing to me.

Published in 1924, this book is not part of the Poirot or Marple series, although it does feature another of Christie’s recurring characters, Colonel Race. Like They Came to Baghdad or The Secret Adversary, it’s more thriller than mystery; a murder does take place near the beginning, but this is only a starting point and not the main focus of the novel.

Most of the novel is narrated by Anne Beddingfield, the recently orphaned daughter of a famous archaeologist. Finding herself alone in the world, with a small inheritance to spend, Anne longs for an adventure to come her way so she can imitate the heroines of her favourite books and films. This wish becomes reality when she witnesses an accident in a London tube station and picks up a piece of paper dropped by the doctor who examines the victim. On this scrap of paper are some numbers and the words ‘Kilmorden Castle’; Anne is sure that these are clues and that she has found the adventure she’s been waiting for. When a woman is found dead the next day in the home of Sir Eustace Pedler, Member of Parliament, a man in a brown suit is suspected of the crime. Convinced that the two incidents are related, Anne deciphers the clues on the paper and boards a ship sailing to Cape Town, hoping to track down the brown-suited man.

Anne is a wonderful narrator and her intelligence, courage and quick wits mean that she is often – although not always – one step ahead of the villains. However, there’s also a second narrator and that is Sir Eustace Pedler. Sir Eustace’s narrative is interspersed with Anne’s and takes the form of a diary in which, in contrast with Anne, he describes his dislike of adventure, as well as his frustration with his annoying secretary Mr Pagett. The diary entries add a lot of humour to the story and I enjoyed hearing Sir Eustace’s voice now and then as a change from Anne’s.

Christie’s novels are always entertaining, but this is one I found particularly fun to read. Stolen diamonds, a revolution, travel through South Africa, a criminal mastermind known only as the ‘Colonel’…there’s such a lot happening and so many things to enjoy. The one aspect of the novel that I didn’t like was the romance between Anne and another character; I thought it seemed to come very suddenly out of nowhere and I was disappointed that Anne, being such a strong person in other respects, had the view that a woman should admire a man’s strength and prepare to be submissive.

Going back to the theme for this month’s read, this novel was inspired by a round-the-world trip taken by Agatha and her first husband Archie Christie in 1922. You can see the full list of categories for Read Christie 2022 at the bottom of the challenge page on the Agatha Christie website.