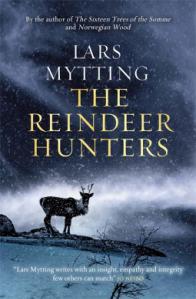 This is the second book in Norwegian author Lars Mytting’s Sister Bells trilogy. I loved the first, The Bell in the Lake, so was looking forward to visiting the village of Butangen again and finding out how the story would continue.

The Reindeer Hunters begins in 1903, more than twenty years after the events of the first novel. Kai Schweigaard, once a newcomer to Butangen, has settled into his role as village pastor, but is still haunted by memories of Astrid Hekne, the woman he had hoped to marry. He also feels guilt over his involvement in the removal of the two bells which once hung in the bell tower of the local church, commemorating Gunhild and Halfrid Hekne, the conjoined twin sisters who were two of Astrid’s ancestors. When Kai hears about a legendary tapestry woven by the sisters – the Hekne Weave – he sets out to search for it, hoping in some way to make amends for what happened in the past.

In the hills just outside Butangen, Astrid’s son Jehans is leading a lonely life, supporting himself through fishing and hunting, having withdrawn from the rest of the community. One day he finds himself in dispute with another hunter when they both claim to have shot the same reindeer, but this marks a turning point in Jehans’ life as he gets to know the other hunter, an Englishman called Victor Harrison, and an uneasy friendship begins to develop.

This, like the first book, is beautifully written and translated. The setting – a remote Norwegian village steeped in superstition and tradition – is vividly described, making this the kind of historical novel where you can become truly immersed in another time and place. Towards the end of the book, though, we see that scientific progress and new technology are finding their way even to Butangen in the form of electricity, improved travel and advances in dairy farming. Events in the wider world also touch the lives of our characters, including the dissolution of the Norway-Sweden union, the First World War and, finally, the flu pandemic of 1918:

There, on the church steps, Schweigaard had put all his accumulated knowledge into his advice. Mass was cancelled indefinitely. Auctions and public dances were best avoided. Folk ought not to visit other villages. They should maintain a distance from strangers. And always veer on the side of prudence.

I enjoyed reading about Kai Schweigaard’s daily life, his duties as pastor and his relationships with the other villagers and I was completely absorbed in his search for the Hekne Weave and what it might reveal. I was much less interested in the details of Jehans’ hunting and fishing expeditions and, later, Victor’s work as a pioneer of aviation, although other readers will probably find those things more enjoyable than I did! For this reason, I didn’t like this book as much as the first and every time the perspective switched to Jehans or Victor, I found myself wanting to return to the village and continue with Kai’s storyline. I did, however, come to love one of the new characters, Kristine, a young woman who doesn’t have an easy life but displays an inner strength and determination that I really admired.

I’ll be looking out for the final book in this trilogy and will be interested to see where the story will go next.

Thanks to Quercus Books, MacLehose Press for providing a copy of this book for review via NetGalley.

This is book 10/50 read for the Historical Fiction Reading Challenge 2022.

8 thoughts on “The Reindeer Hunters by Lars Mytting”