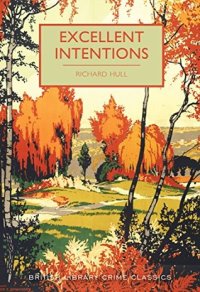 Richard Hull’s The Murder of My Aunt is one of the best books I’ve read from the British Library Crime Classics series. I’ve since read some of his others, available from a different publisher (Agora Books) and apart from Left-Handed Death, which was quite entertaining, they were disappointing in comparison. I hoped for better things from Excellent Intentions, another BLCC book. If nothing else, it has a lovely autumnal cover!

First published in 1938, Excellent Intentions begins in the courtroom. We know that someone is on trial for murder – but who is it? We will have to wait until the end of the book to find out; it’s a clever and unusual structure, with the details of the crime unfolding through a series of flashbacks as the witnesses provide the evidence and the jurors listen to the cases put forward by prosecution and defence. This format works very well as it allows us to see the story from lots of different angles and look for clues that will help us to guess who it is that has been accused.

We do know that the victim is Henry Cargate, a rude and unpleasant man who has made himself very unpopular since moving into the ‘big house’ in the village of Scotney End. On the day of his death a problem with his car forces him to take a train into town and just as the train leaves the station he is seen by another passenger to take a large pinch of snuff. Seconds later he is dead. As Cargate was known to have a weak heart, it is at first assumed that he has died of natural causes – until his snuff is found to have been laced with potassium cyanide, bought by the victim himself to destroy a wasps’ nest.

Because Cargate is such a horrible man – a man who ‘wanted to do nobody any good’ – there are plenty of people who could have had a reason for wanting him dead. However, there are only four who could have had access to the snuffbox and the poison, both of which were kept in Cargate’s own study. There’s Mr Yockleton, the vicar, whom Cargate had accused of stealing an emerald the day before the murder; Raikes the butler and Miss Knox Forster, the secretary, both members of Cargate’s household; and finally, Andrew Macpherson, a dealer in stamps. Cargate is a keen stamp collector and he and Macpherson had recently had a disagreement over whether some of the stamps in his collection were fakes. I should warn you here that we learn a huge amount about different types of stamps and their colours, markings and perforations, which you may or may not find interesting!

Any of these four people could have committed the murder, but only one has been accused and it’s up to the jury to decide whether this person really is the culprit. As the trial continues, we hear how Inspector Fenby, the detective investigating the crime, has decided who he thinks was responsible – and this is where I started to lose interest a little bit. There’s a lot of focus on alibis, timings, the positions of the snuffbox and the poison on Cargate’s desk, and who could have been in certain rooms during certain periods without being seen. This is never my favourite kind of mystery as I find it difficult to keep all of these things straight in my mind; I tend to prefer books that concentrate more on the motives of the characters and less on the technicalities of the crime.

I loved the ending, though. Even after we find out who it is that’s on trial, there’s another twist to come! This was an entertaining read overall and I would still like to read Keep It Quiet and Murder Isn’t Easy, the only other two Hull novels currently in print that I haven’t read yet.