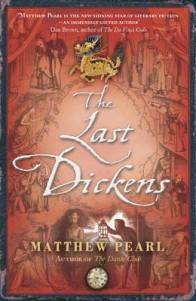 The Last Dickens is a literary mystery involving a search for the missing manuscript of the final, unfinished Charles Dickens novel, The Mystery of Edwin Drood. This book didn’t appeal to me when it was published a couple of years ago because at that time I had only read one Charles Dickens book and didn’t have much interest in reading a historical fiction novel about him. Since then, though, I’ve read a few more of Dickens’ books (including Edwin Drood) and so I thought I would give The Last Dickens a try now.

In 1870, the new Dickens novel, The Mystery of Edwin Drood, is being serialised by his American publisher Field, Osgood & Company, who are based in Boston. When Field and Osgood send their young office clerk, Daniel Sand, to the docks to collect the latest instalment which has been sent from England, Daniel is later found dead under suspicious circumstances. With the shocking news that Dickens has also died and left his novel incomplete, James R Osgood travels to England in search of clues as to how the story may have been going to end. Osgood is accompanied by Daniel Sand’s sister, Rebecca, another employee of the publishing house. Can they uncover the truth about Daniel’s death and at the same time find the remaining chapters of The Mystery of Edwin Drood?

Just when Osgood and Rebecca’s adventures start to get exciting, the story is interrupted with a very long flashback to Dickens’s American tour several years earlier. Some of this was interesting (it’s such a shame there was no recording equipment in those days as it would have been fascinating to have been able to hear Dickens reading his books on stage to an audience!), but there was a lot of detail that I didn’t think was absolutely necessary and by the time we returned to Rebecca and Osgood the flow of the story had been completely lost. There were also some shorter sections set in India, where Dickens’s son Frank, serving with the Bengal Mounted Police, is on the trail of opium thieves, but I didn’t think this sub-plot really added anything to the book and I admit I didn’t quite understand what was going on.

One aspect of the book I did enjoy was the insight into the American publishing industry in the 19th century, a time when copyright laws appeared to be virtually non-existent. There are some entertaining descriptions of the lengths publishers would go to in order to obtain manuscripts and be the first to publish them.

Another similar book which was released around the same time as this one was Drood by Dan Simmons. I read Drood last year and although I had a couple of problems with that book too, I think I probably enjoyed it more than The Last Dickens. It’s interesting to see how two different authors can use the same historical material to create such very different books.

14 thoughts on “The Last Dickens by Matthew Pearl”