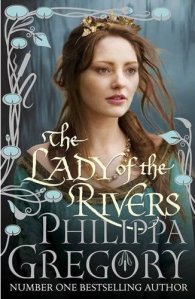 The Lady of the Rivers is the third book in Philippa Gregory’s Cousins’ War series. This series is set during the Wars of the Roses, with a focus on some of the women who played an important role in this period of English history. The two previous novels, The White Queen and The Red Queen, told the stories of Elizabeth Woodville, wife of King Edward IV, and Margaret Beaufort, mother of King Henry VII. In The Lady of the Rivers it’s the turn of Jacquetta Woodville, Elizabeth’s mother.

Before beginning this book I knew almost nothing about Jacquetta (apart from what I learned about her in The White Queen) and it was good to have the chance to read a historical fiction novel about a woman who has so often been overlooked and forgotten. This novel follows Jacquetta throughout her life, beginning with her teenage years and moving on to her first marriage to the Duke of Bedford, an uncle of England’s King Henry VI. Left a widow at nineteen, Jacquetta marries again, for love this time, to one of the Duke’s squires, Richard Woodville. Over the following years, she becomes a close friend and advisor to Margaret of Anjou, the young wife of Henry VI, and is at the queen’s side during some of the most important moments of Henry’s reign.

Jacquetta’s family claim to have descended from the water goddess, Melusina, and supposedly have magical powers, including the ability to predict the future. For example, Jacquetta hears singing when someone in her family is about to die. As in The White Queen, magic is a major theme of this book. There are lots of references to alchemy, herbalism, tarot cards, and also to the ‘wheel of fortune’, which Jacquetta sees as a reminder that while it’s possible for a woman to rise to the very top, there’s an equal chance that she can fall to the very bottom.

I like the fact that the novels in this series are written from a woman’s perspective, with a focus on how women were treated in 15th century society and how difficult it could be for them to find a place for themselves in a world dominated by men. I also like the way the books take a very personal approach to history, showing how the historical events directly affect the characters and their lives. The present tense gives the feeling that you’re there with the narrator as events unfold, and the first person narration creates an intimate feel. Of the three books in the series so far, this one had the most likeable narrator and I’ve been left with a sense of unfairness at how Jacquetta has been ignored by history.

Finally, in case anyone is wondering where to begin with this series, I don’t think it’s necessary to read them in any particular order as they do all stand alone. In fact, this one, The Lady of the Rivers, despite being the most recently published book, is set before The White Queen so could be a logical place to start. According to Philippa Gregory, the next novel in the series is going to be about Anne and Isabel Neville, the daughters of the Earl of Warwick. I’m already looking forward to that one!

I received a review copy of this book from Simon & Schuster. I also received a copy of the non-fiction companion book to the series, The Women of the Cousins’ War, so you can expect to see my thoughts on that one soon too.

8 thoughts on “The Lady of the Rivers by Philippa Gregory”