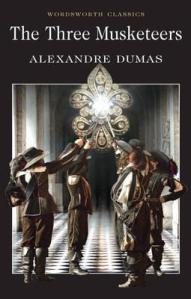 One of my goals for 2013 was to re-read more of my favourite books, something I’ve been neglecting in recent years. Well, here we are in the middle of April and so far I’ve only re-read one!

The Three Musketeers may be the title, but our hero is not a musketeer when we first meet him at the beginning of the novel, in the year 1625; his name is d’Artagnan and he’s a young man from Gascony in France, on his way to Paris where he hopes to join the King’s Musketeers under the command of Monsieur de Tréville. On his arrival in Paris, d’Artagnan encounters three of the musketeers – Athos, Porthos and Aramis – in one of those wonderful openings to a book that once you’ve read you’re unlikely ever to forget.

Soon d’Artagnan and the three musketeers become the best of friends, and when d’Artagnan meets and falls in love with Constance Bonancieux, one of the Queen of France’s ladies, all four of them are drawn into the intrigue surrounding the Queen’s affair with the powerful English nobleman, the Duke of Buckingham. With the King’s advisor, Cardinal Richelieu, hoping to expose the affair, Constance, d’Artagnan and his three friends become targets of the Cardinal and his spy, the beautiful Lady de Winter. But Milady, as she is known, is hiding a secret of her own and if d’Artagnan discovers the truth, he and Constance could find themselves in even greater danger.

I first read The Three Musketeers five years ago and when I finished it I had intended to read the other books in the trilogy (the second is Twenty Years After and third is the three-volume The Vicomte de Bragelonne/Louise de la Valliere/The Man in the Iron Mask) but as so often happens other books got in the way and I never did get around to continuing with the d’Artagnan series. And so when I made my list for the Classics Club I put all of them on there – along with a re-read of The Three Musketeers as I thought it would be a good idea to remind myself of the characters and story before embarking on Twenty Years After – and anyway, I never need an excuse to re-read a book that I enjoyed so much the first time!

I love Alexandre Dumas and although The Three Musketeers is not my favourite of the three novels of his that I’ve read (that would be The Count of Monte Cristo) I still think it’s a wonderful book with some great characters. The musketeers all have such different personalities: the aristocratic, melancholy Athos, the loud, brash Porthos, the fastidious would-be priest, Aramis, and of course, the brave, passionate d’Artagnan. Everyone will be able to pick a favourite musketeer, and mine is Athos. In her recent post on The Count of Monte Cristo, Lisa compared the character of Edmond Dantes with Francis Crawford of Lymond from the Lymond Chronicles by Dorothy Dunnett (two other great fictional characters, by the way); I agree, but I can also see some of Athos’ character traits in Lymond too, especially during one of the most memorable set pieces in the book, where the four friends eat breakfast in a fortress surrounded by enemy soldiers because it’s the only place they can find to talk in private.

It seems five years is a good length of time to wait between re-reads of a book. I had forgotten enough so that I could be surprised by the twists and turns of the plot, but remembered just enough to be able to look forward to some of my favourite parts: the breakfast scene I mentioned above, the episode with the Queen’s diamond studs, and especially the sequence of chapters in the middle (entitled Porthos, The Thesis of Aramis and The Wife of Athos) which is just a joy to read. The friendship between d’Artagnan, Athos, Porthos and Aramis is so inspiring and heartwarming (all for one, one for all!) and this is why, for me, there’s a change in the tone of the book when towards the end, the focus switches from the musketeers to Milady and I don’t enjoy the final third quite as much as the first two thirds.

Now, a note on the translation. I read the Wordsworth Classics edition of The Three Musketeers which uses the first English translation by William Barrow in 1846 (I think this is also the one used by Oxford World’s Classics). I would be interested to try a newer translation, such as Richard Pevear’s, to see how it compares – and also because I’m aware that the older translations altered certain parts of Dumas’ original text because they considered it too sexually explicit for Victorian readers. I can see that some readers today would probably find the Barrow translation too literal and antiquated but I didn’t have a problem with it at all; I actually quite like the way the sentences are constructed and I think it has a certain romantic, old-fashioned quaintness about it.

I’ll be moving on to Twenty Years After very soon!

21 thoughts on “The Three Musketeers by Alexandre Dumas (re-read)”