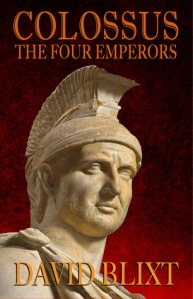 This historical fiction novel by David Blixt is set in Rome in the 1st century AD and follows the story of one ambitious but honourable man, Titus Flavius Sabinus, and his family. This is actually the second in the Colossus series and I haven’t read the first, but fortunately it doesn’t seem to be essential to read them in order. Rather than being a conventional sequel to the first book, Stone and Steel, this one adds another layer to the same story, choosing to focus on some different characters and events.

The Four Emperors begins near the end of Nero’s reign. An unpredictable and eccentric emperor, Nero is capable of acts of great cruelty, and Rome under his rule is a dangerous place to live. When Nero commits suicide to avoid assassination, a power struggle begins with four different claimants becoming emperor in the space of a year. We see the events of this turbulent period from the perspective of Sabinus and the other members of his family, including his elderly father, his two sons, Tertius and Clemens, and a cousin, Domitian. Domitian’s father, Vespasian, has been sent to Judea to put down a Jewish rebellion there, and Sabinus hopes this will be a chance for the family to rise in the world – but when he visits the Oracle of Delphi, he learns that he may be fated to be forgotten by history…

Ancient Rome is not one of my favourite periods for historical fiction, but having enjoyed another of David Blixt’s books (The Master of Verona, set in 14th century Italy) I was happy to try this one. Because I don’t read about the Romans very often, I was fascinated by Blixt’s portrayal of their daily lives, their beliefs and customs. I thought his descriptions of the Oracle’s prophecies and the wildness of the Saturnalia celebrations were particularly vivid. The book also explores the politics of the period, the military campaigns, and how Jews and Christians were treated by the Romans.

Another storyline I found interesting involved a young Greek shepherd boy called Spiros, who was forced to marry Nero because his face reminded Nero of his dead wife Poppaea Sabina’s. This and many other incidents showed how dangerous and uncertain life could be during this period and how everyone had to obey the Emperor’s every whim, however cruel or outlandish. Life under the other rulers who succeeded Nero during the Year of the Four Emperors was no less precarious and unpredictable. Of all the time periods in history, this is not one that I would like to have lived in!

At first I thought it would be hard to remember who all the characters were, as so many of them had very similar names thanks to the complicated Roman naming system, but it was actually a lot easier to understand than I thought it would be. Sometimes when I read fiction set in Ancient Rome I find it difficult to connect with and relate to the characters. I’m not sure why it should really be any different from reading about the Tudor or medieval periods but for some reason, for me, it is. I didn’t have that problem with The Four Emperors; every character came alive on the page. I’ve only really mentioned the men so far, but there were some interesting female characters too, including Vespasian’s mistress, Caenis, and two slaves, Abigail and Perel.

My only problem with this book was that, after such a great start, in the second half of the novel there are some long battle sequences which, although they were well written, I didn’t really enjoy reading. I just don’t find battle scenes very interesting and my attention often starts to wander so much that I struggle to follow what’s happening. That was the case again here and it meant that I didn’t love the book quite as much as I had expected to at the beginning, but this is just due to my personal taste and not the author’s fault. Apart from this, I did enjoy The Four Emperors and although I didn’t feel at any disadvantage as a result of starting with the second book in the series, I would now like to go back and read the first one, Stone and Steel, which is told from a Judean perspective.

I read The Four Emperors as part of the Historical Fiction Virtual Book Tour. There’s only one more stop on the tour, but if you’d like to read more about the book and the author you can find a list of previous reviews, guest posts and interviews here.

7 thoughts on “Colossus: The Four Emperors by David Blixt”