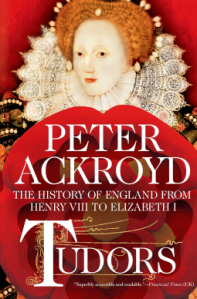 Peter Ackroyd has written over thirty non-fiction books, but Tudors is the first one I have read. I read a lot of historical fiction set in the Tudor period, so I thought it would be a good idea to read some factual information about the period and fill in some gaps in my knowledge. Tudors is the second volume in Ackroyd’s new The History of England series and while I would have liked to have started at the beginning with the first book, Foundation, the fact that I started with this one wasn’t a problem.

I was surprised to find that this book does not begin with the life of the first Tudor king, Henry VII. Instead, it starts with his death and the accession to the throne of his son, Henry VIII in 1509. Ackroyd then takes us through the reigns of Edward VI, Mary I and Elizabeth I, ending with Elizabeth’s death in 1603 – a whole century of history. Throughout the book, his focus is on the subjects of religious change and reform and once I knew that this was the main theme of the book, the decision to include Henry VII in the previous volume rather than this one made more sense as the reformation of the English church only really began with Henry VIII’s break away from Rome.

As this was my first experience of Peter Ackroyd’s work and I wasn’t sure what to expect, I was pleased to find that Tudors was both well written and well researched, while not being too academic, which makes it a good choice for the general reader with an interest in English history. With so much history to cover, I thought Ackroyd did a good job of selecting which historical events to concentrate on and how long to spend discussing each one. He keeps everything in chronological order, rather than jumping around in time, which makes the book easy to follow and if you’re left wanting to know more about a particular person or topic, an extensive list of further reading is included at the end of the book.

My only problem with this book was that I don’t personally find the subject of religious reform particularly interesting so, for me, some sections were slightly dry and boring. Obviously the English Reformation was of huge importance and I can understand why Ackroyd chose to give it so much attention, but I would have preferred more detail on how these religious changes affected the daily lives of the English people as well as those of the monarchs and nobility. I would also have liked to delve deeper into the characters of some of the fascinating historical figures who lived during the Tudor period, but I felt that Ackroyd was more concerned with chronicling the events of the period rather than looking at character.

Six volumes are planned in this series and Tudors is only the second, so there’s a lot of history still to come!

I received a copy of this book for review from Netgalley.

13 thoughts on “Tudors by Peter Ackroyd”