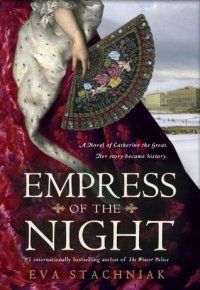 This is a follow up novel to The Winter Palace, a novel about Russia’s Catherine the Great which I read in 2012. I remember having a few problems with The Winter Palace so I wasn’t sure whether to read this book or not, but I do love Russian historical fiction and in the end I couldn’t resist. Looking back at my review of The Winter Palace, which was narrated by a fictional character, Varvara, I had said that I would have preferred a book written from Catherine’s perspective. That is exactly what Eva Stachniak has done in Empress of the Night, so I was interested to see whether that would help me to enjoy this book more than the first.

The novel has an unusual structure, beginning on the final day of Catherine’s life in 1796. She has just suffered from a stroke and in the hours that follow she looks back on her life in the form of flashbacks and memories. Occasionally we return to the present to see how Catherine and the people around her are trying to deal with what has happened. By the time she takes her last breath we have watched the whole of Catherine’s story unfold, from her early days in Russia at the court of the Empress Elizabeth to the final years of her own reign.

Although this is the second of Eva Stachniak’s Catherine the Great books, the two could be read in either order (for this reason the publishers are describing it as a ‘follow up’ rather than a ‘sequel’). For anyone who hasn’t yet read The Winter Palace, this book (or the first part of it, anyway) covers some of the same events, including the young Catherine’s arrival in Russia as the Princess Sophie of Anhalt-Zerbst, intended bride of the Empress Elizabeth’s nephew, Peter, and her relationship with her friend and spy, Varvara. If you have already read The Winter Palace, however, you are seeing everything from a different perspective this time.

Catherine the Great was a fascinating woman but she is not someone I’ve read about in any depth before and this meant that I really learned a lot from this book. But while major events such as Russia’s war with the Ottoman Empire, the Pugachev Revolt and the creation of the Legislative Commission are discussed, Catherine devotes much more time to remembering her relationships with her various lovers. And there are a lot of them! Her marriage to Peter III was not a happy one and ended with his assassination in 1762 after which Catherine succeeded him to the throne. She was romantically involved with many other men, including Serge Saltykov, Stanislaw Poniatowski (the future king of Poland), Grigory Orlov, and her favourite lover, Grigory Potemkin.

More interesting than the love affairs, for me at least, were the descriptions of Catherine’s family life. It was so sad that her son, Paul, was taken from her by the Empress Elizabeth and allowed to spend very little time with his mother so that in later life he is somebody she barely knows and doesn’t like. But Catherine has warm, loving relationships with several of her grandchildren, particularly Alexander and Alexandrine. 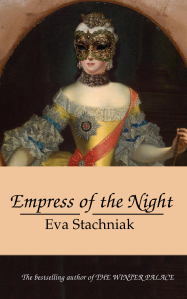 The style of the writing in this book seemed to me to be very different from The Winter Palace – it’s very fragmented and probably what you could describe as ‘stream-of-consciousness’. The disjointed narrative meant that at first I struggled to really get into the story and connect with Catherine, but on reflection I can see that a woman who had just had a stroke and knew that she was dying probably would be confused and incoherent. It would have been nice to have been given some dates, though, because I found it difficult to measure the passing of time and would have liked to have had some idea of when various events were taking place and of how old Catherine was.

I didn’t find this a particularly ‘easy’ read because of the way the narrative jumped around and I think maybe The Winter Palace is my favourite of the two books after all, but I did enjoy learning more about this important and powerful woman.

Empress of the Night is available now published by Bantam in the US or by Traverse Press as an ebook only in the UK. Both covers are pictured above. I received a copy for review from Bantam via NetGalley.

4 thoughts on “Empress of the Night by Eva Stachniak”