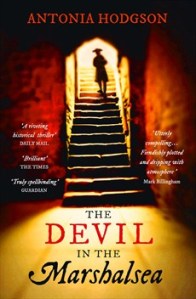 This is a murder mystery with a difference, being set almost entirely within the confines of an eighteenth century debtors’ prison. Our narrator, Tom Hawkins, is a young man who has rebelled against his clergyman father’s plans for his future and is enjoying himself in London, spending all his money on drinking and gambling. After a big win at the card tables one night, Tom is attacked on his way home and his winnings are stolen, leaving him unable to pay his debts. Taken to the notorious Marshalsea Prison, he is horrified to discover that the last occupant of his cell, Captain Roberts, was murdered. The killer has never been caught, but Tom’s new roommate, the charismatic and mysterious Samuel Fleet, is the man most people believe to be the murderer.

The Marshalea is privately run for profit, so it’s not surprising that the prison governors want the killer identified as quickly as possible to avoid any further scandal. Told that his only chance of being released depends on whether or not he can solve the mystery of Roberts’ death, Tom agrees to investigate. Unsure who can be trusted and beginning to wonder whether such things as truth and justice even exist in a place as corrupt as the Marshalsea, Tom eventually uncovers a web of betrayal and deception on a scale he could never have imagined.

Other authors have written about the Marshalsea, most famously Charles Dickens in Little Dorrit, but Dickens’ Marshalsea was a newer building on a site further down the road; set in 1727, Antonia Hodgson’s novel refers to the original prison. Not knowing anything at all about the Marshalsea, this was quite an eye-opening book for me. I was aware that prisoners were often able to offer bribes in return for better living conditions and privileges, but I hadn’t realised there was such a great disparity between the fate of those who could afford to pay and those who couldn’t.

The prison was divided into two sections. The prisoners who had some money to spend or who had influential friends, lived on the Master’s Side, which was almost like a complete town in itself, with coffee houses, bars, restaurants and even a barber. They had the freedom to move around and in some cases were even given permission to go out into London during the day. For the poor people on the Common Side, things were much worse. Crammed into tiny cells and suffering from starvation, disease and overcrowding, they died at a rate of up to twelve a day. Tom Hawkins, whose best friend happens to work for Sir Philip Meadows, Knight Marshal of the Marshalsea, is lucky enough to find himself on the Master’s Side but with the knowledge that if his luck should run out, he could find himself thrown into the Common Side to meet his death with the others.

This is not a book for the faint-hearted as there are some horrible descriptions of sickness, torture and brutality, not to mention the dirty, squalid conditions the unfortunate inmates of the Common Side were forced to endure. Knowing that this was an experience many people really did have to go through makes it even more horrific. Despite this, I found The Devil in the Marshalsea very entertaining and fun to read. The book is filled with larger than life characters and I was surprised to find, when I read the notes at the end of the book, that many of these people really existed and were mentioned in the diary of John Grano, a debtor who spent a year in the prison from 1728-1729.

As a mystery novel, The Devil in the Marshalsea kept me guessing right until the end. I did not work out who the murderer was and even after the truth was revealed there were still more plot twists and revelations to come. As a work of historical fiction it’s equally impressive; I loved the portrayal of eighteenth century London both inside and outside the Marshalsea. I was so pleased to find that there’s going to be a sequel to this book and I’m already looking forward to meeting Tom Hawkins again!

15 thoughts on “The Devil in the Marshalsea by Antonia Hodgson”