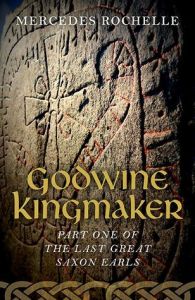 Earlier this year I read Mercedes Rochelle’s Heir to a Prophecy, a novel set in the 11th century and inspired by Shakespeare’s Macbeth. Her second book, Godwine Kingmaker: Part One of The Last Great Saxon Earls, is also set in Anglo-Saxon England – in the years leading up to the Norman Conquest – and tells the story of Godwine, Earl of Wessex.

Godwine, son of Wulfnoth, is only eighteen when he meets a Danish warrior in the woods and offers his assistance. This chance meeting will change the course of Godwine’s life, because the man he has befriended is Ulf, brother-in-law of Canute, King of Denmark. When Canute takes the throne of England after the death of Edmund Ironside in 1016, Godwine is by his side offering advice and support. During the years that follow he rises to become Earl of Wessex, one of the most powerful men in the kingdom, but Godwine’s good fortune will not last forever…

Godwine Kingmaker provides a fascinating portrayal of one of the last and greatest Saxon Earls. I have come across Godwine once or twice before in other novels set during this time period, but have never read about his life in so much depth. As the father of Harold, the future King of England, his historical significance is obvious, but he was also a very important nobleman in his own right. I thought he was a great character and I enjoyed following his story from his humble beginnings to the height of his power and influence.

One aspect of the story I found particularly interesting – and also quite frustrating – is the relationship between Godwine and Ulf’s sister, Gytha. Gytha very reluctantly becomes Godwine’s wife and for a long time after the marriage she persists in denying her feelings for him, even to herself. Although her behaviour annoyed me at times, I thought it was good that this storyline was not resolved too quickly and continued to have implications for several of the characters later in the book.

Godwine is an ambitious man but he is also a man who cares about his family and throughout the novel we see him working to ensure a safe and secure future for his children, even while his fortunes rise and fall as three more kings follow Canute. Despite Godwine’s best efforts, his eldest son, Swegn, stumbles from one disaster to another, but it is his second son, Harold, who will carry the family’s legacy forward.

Mercedes Rochelle is now working on the sequel to this book, The Sons of Godwine, which will tell the story of Harold Godwineson and his brothers. I’m looking forward to reading it!

Thanks to the author for providing a copy of Godwine Kingmaker for review.