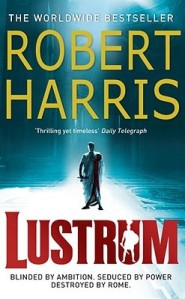 Lustrum (also published under the title Conspirata) is the second of a trilogy of fictional biographies of the Roman statesman, Marcus Tullius Cicero. The first book in the trilogy, Imperium, was one of my favourite reads of the year so far and I’m pleased to say that I enjoyed Lustrum even more. A note from the author at the beginning of the book states that both novels can be read independently, but my advice would still be to read them in order, particularly if, like me, you have never read about Cicero’s life before.

The three novels (the third is called Dictator) are narrated by Cicero’s slave and secretary, Tiro, a real historical figure believed to have invented an early form of shorthand and thought to have written a genuine biography of Cicero which was lost during the fall of Rome. Imperium is a recreation of the first part of Tiro’s biography and covers the beginnings of Cicero’s political career, ending just as he is elected one of Rome’s two consuls. Lustrum continues the story, taking us through the year of Cicero’s consulship and the four years that follow (the term ‘lustrum’ is the name given to a five-year period in Ancient Rome).

The period of Cicero’s life covered in Lustrum is a time of highs and lows. As consul for the year 63 BC, he faces the biggest challenge of his career so far when he uncovers a conspiracy led by the senator Catilina to assassinate him and overthrow the Roman Republic. Cicero is awarded the title “Father of the Country” for the part he plays in dealing with this threat to Rome, but even his newfound popularity can’t protect him from the further plots and machinations of his enemies Gaius Julius Caesar and Publius Clodius Pulcher.

What a great book this is! I was completely gripped from beginning to end, immersed in Cicero’s world, watching as he struggles with his conscience, tries to make difficult moral decisions and attempts to outwit powerful men like Caesar, Crassus and Pompey the Great (the First Triumvirate). I realise a book about Roman politicians may not sound very exciting, but this one really is.

While I found it difficult to keep track of some of the minor characters and the relationships between them (bearing in mind I have very little knowledge of Ancient Rome) there is some great characterisation when it comes to the more well known names. I particularly loved the portrayal of Cato the Younger! Caesar comes across very much as the villain in this trilogy, but remembering that we only see things from the perspective of Cicero (via Tiro), we are obviously being given a biased view of his actions. The same story told from Caesar’s point of view would clearly be very different.

Tiro himself remains in the background, as he did in Imperium, but there is a small amount of character development for him; he even finds a love interest, although nothing really comes of it. But at the heart of the story, of course, is Marcus Tullius Cicero. The portrait of Cicero given to us by Tiro is generally very positive – he is clever and ambitious and usually (though not always) tries to do what he believes is best for the Roman Republic. But he also has a lot of faults and flaws: his arrogance and overconfidence lead him to make some poor choices and he is not above entering into dubious political alliances with men such as his fellow consul, Hybrida, whom he knows are corrupt or incompetent and don’t have Rome’s best interests at heart.

One of the things I love about the way Robert Harris portrays Rome is that he manages to make it feel historically accurate yet strangely contemporary at the same time. There are debates over foreign policy, a court case involving a sex scandal and questions asked over politicians’ expenses, all things which still happen in modern politics. As with Imperium, the scenes set in the senate are particularly dramatic and full of tension, making me wish I had been there to hear one of Cicero’s famous speeches for myself.

Lustrum was shortlisted for the Walter Scott Prize for Historical Fiction in 2010. I am grateful to the Prize for pointing me in the direction of Robert Harris; as well as the two Cicero books, I also loved An Officer and a Spy (the 2014 winner). I’m now looking forward to finishing this trilogy with Dictator and also to reading more fiction set in the Roman Republic and seeing how other authors portray the same characters and events.

7 thoughts on “Lustrum by Robert Harris”