The Accursed Kings has it all. Iron kings and strangled queens, battles and betrayals, lies and lust, deception, family rivalries, the curse of the Templars, babies switched at birth, she-wolves, sin and swords, the doom of a great dynasty…and all of it (well, most of it) straight from the pages of history.

This is how the author George R.R. Martin has described Maurice Druon’s series of French historical novels, the inspiration behind his own Game of Thrones. The Accursed Kings (Les Rois Maudits) consists of seven books, all published between 1955 and 1977 and all available in English translations. The Poisoned Crown (Les Poisons de la Couronne) is the third in the series, continuing the story from The Iron King and The Strangled Queen. 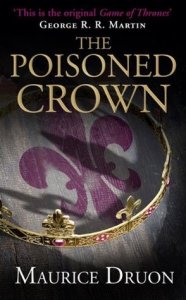 It’s 1315 and Louis X (known as le Hutin, the Quarreller) is on the throne of France. As the son of the late Philip the Fair, whose line was cursed ‘to the thirteenth generation’, Louis’ reign will be short and troubled. In the previous novel we saw the demise of his first wife, Marguerite of Burgundy. Now a second marriage has been arranged – with the beautiful Clémence of Hungary, who arrives in France after a terrible sea voyage and quickly wins the hearts of those around her with her kindness, generosity and religious devotion. All that remains is for Clémence to provide the king with heirs and secure the succession to the throne.

In some ways it seems that the presence of Clémence is making Louis a better person, but in others he is still proving to be cruel, weak and incompetent. A war against Flanders ends disastrously, he is unable to deal with the impact of famine and he fails to listen to good advice, being too easily influenced by his unscrupulous uncle, Charles of Valois. Meanwhile, trouble is brewing again between the king’s cousin, Robert of Artois, and Robert’s great-aunt Mahaut, who are still fighting over the lands they each regard as their own. Eventually the barons of Artois begin to rise against Mahaut, bringing the king into the dispute and setting a chain of events into motion which could bring about the end of Louis’ reign.

Three books into this series, I’m still enjoying it, but The Poisoned Crown is probably my least favourite so far. It feels like a bridging novel, leading us from the previous two volumes into the remainder of the series, rather than a satisfying story in itself. There’s less action in this one and too much focus, at least in my opinion, on the conflict between Robert of Artois and the Countess Mahaut. Still, there were plenty of things that I did like and the history is as fascinating as ever; I previously had almost no knowledge of what was happening in France during this period, so I’m really learning a lot from these novels.

Not everything in The Accursed Kings is based strictly on historical fact, though. One of the subplots which is largely fictional involves the Lombard banker, Spinello Tolomei, and his young nephew, Guccio Baglioni. Guccio’s romance with the impoverished noblewoman Marie de Cressay moves on a step in this book, although Druon goes on to spoil things for us by informing us of what the next ten years will have in store for them. One thing I find quite annoying about Druon’s writing is his habit of constantly telling us what is going to happen next. Of course, when you don’t know the history, even the titles of some of these books are spoilers in themselves!

The Poisoned Crown ends abruptly, but the scene is set for the fourth book in the series, The Royal Succession.

9 thoughts on “The Poisoned Crown by Maurice Druon”