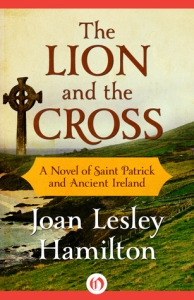 If you’re looking for the perfect book to read as St Patrick’s Day approaches, this could be it. Originally published in 1979, The Lion and the Cross: A Novel of Saint Patrick and Ancient Ireland has recently been made available as an ebook by Open Road Media. Narrated by Patrick himself, it is a fictional account of the life of the man who would become Ireland’s patron saint.

The story takes place in the 5th century, a time of unrest and uncertainty as the period of Roman rule in Britain has come to an end, leaving the country vulnerable to attacks from raiders. As the novel opens in the year 410, Magonus Sucatus Patricius, son of wealthy Romano-Britons, is sixteen years old. Despite being the grandson of Potitus the priest, Magonus himself has no intention of devoting his life to religion, but this is something which will slowly change. The first big turning point in Magonus’s life comes when he is captured by barbarian raiders who take him across the sea to Ireland where he is sold into slavery.

Now known as Padraic, or Patrick, he spends the next few years herding sheep in the Irish countryside and – after catching the attention of the Ri and Rigan (king and queen) – trying to survive the intrigues and machinations of the court. During this time his faith strengthens and when he eventually manages to escape from his captivity and from Ireland, Patrick must make the decision whether to one day return and convert the people to Christianity.

In The Lion and the Cross, Joan Lesley Hamilton has drawn on a variety of sources including The Confession of St Patrick, Irish mythology and historical fact to recreate the story of Patrick’s life. As she states in her author’s note, this period of history is ‘obscured by the roiling, silent fog of centuries’ and there are many things we don’t know about Patrick and his world; however, I think Hamilton does a good job of working with what little information is available and finding the right balance between fact and fiction.

The praise at the front of this book compares it to Mary Stewart’s Merlin trilogy, which I have read and loved. Although they are very different stories, I can understand the comparison; like Stewart’s The Crystal Cave, The Lion and the Cross is set shortly after the decline of the Roman Empire, it is narrated by a young male protagonist and it has a slightly magical feel (the first chapter deals with Patrick’s meeting with the Morrighan, a legendary Celtic goddess). The writing is quite beautiful and poetic at times, but let down by the dialogue – some of the characters speak with Irish accents which, to me, don’t sound at all right.

Patrick himself is not the easiest of characters to like. He is a stubborn, arrogant and defiant young man and because of this, despite the ordeals he goes through, I sometimes found him difficult to connect with. Patrick’s personality, though, is an important part of the story; it’s the reason he’s able to survive and to accomplish what he does, and it explains his internal struggles with God and the doubts he has to overcome. I did enjoy learning about Patrick and his life, but the religious element of the novel is very strong (as you would expect from a book about a saint) and I think the ideal reader for this book would be someone with a particular interest in religious history.