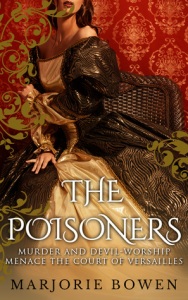 I have read several novels by Marjorie Bowen this year and this is one of my favourites so far. First published in 1936, The Poisoners originally appeared under one of her other pseudonyms, George Preedy, and now that I’ve read it I can see why she chose to use a different name for this one. Although this book, like the others I’ve read, is set in the past, it is more of a mystery/thriller which should appeal to readers of vintage crime as well as to fans of historical fiction.

The story takes place in 17th century Paris during the reign of the Sun King, Louis XIV, and revolves around a famous murder scandal known as L’affaire des poisons (Affair of the poisons). Our hero is Charles Desgrez, newly arrived in Paris with his wife, Solange, to take up a position as Lieutenant of Police and keen to make a name for himself. At the beginning of the novel, the couple are attending a party for Solange’s birthday, when one of the guests – the Widow Bosse, a supplier of perfumes – drunkenly boasts of becoming rich by helping wives to become widows. “I’ve only got three more poisonings to do and I shall be a very wealthy woman,” she says.

To satisfy his curiosity, Desgrez asks Solange to visit the Widow in disguise, posing as a wife unhappy with her husband – and he is shocked by what he learns. Reporting his findings to the Chief of Police, M. de la Reynie, the two begin to investigate and gradually discover that the network of poisoners operating in Paris is much larger and more sophisticated than they could ever have imagined. To complicate things further, some of the people involved are closely connected to the Sun King himself – so Desgrez and de la Reynie must find a way to bring the criminals to justice while avoiding the publicity the King would prefer to avoid.

The Affair of the Poisons is a dark and fascinating episode in Parisian history. I’ve read about it before, in The Oracle Glass by Judith Merkle Riley, and it was good to revisit the same subject from a different angle. As far as I can tell, Bowen’s novel sticks to the basic historical facts of The Affair, with the addition of a few fictional characters and plot developments. The result is an atmospheric and suspenseful crime novel featuring fortune tellers and spies, counterfeiters and apothecaries, an empty house which hides sinister secrets, mysterious letters marked with the sign of a pink carnation, and a society thought to be involved in black magic.

The plot is excellent – fast-paced and exciting – but there’s not a lot to say about the characters in The Poisoners. Many of them are based on real historical figures, such as the king’s mistress, Madame de Montespan, and the notorious poisoner, La Voisin. Although they are all interesting to read about, none of them are developed in any great depth. I enjoyed reading about the work of the police officers in the novel (I hadn’t realised the French police were so well organised in the 17th century, which is something Bowen talks about in her author’s note) and I did like Charles and Solange Desgrez, but they are not the sort of characters who stay in your thoughts after finishing the book. This is a novel you would read for the plot rather than the characters, and maybe this is one of the differences between the books which were originally published under the Marjorie Bowen and George Preedy names.

If you’ve read anything by Marjorie Bowen (or any of Margaret Gabrielle Vere Campbell’s other pseudonyms) I’d love to hear what you thought!

13 thoughts on “The Poisoners by Marjorie Bowen”