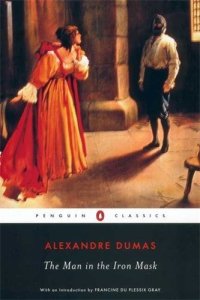 I had considered starting 2017 by posting some reading plans and resolutions but, to be honest, after failing to keep most of last year’s, I don’t want to make any for this year. I do have one goal for 2017, though: I would like every book I read to be a potential book of the year. That’s unrealistic, I know, but it’s something to keep in mind when I’m choosing which books to read and when I’m deciding whether or not it’s worth continuing with a book I’m not enjoying. And I’m already off to a great start with my first January read – The Red Sphinx by Alexandre Dumas! I’m looking forward to telling you about that one after I’ve finished reading it, but in the meantime here are my thoughts on another Dumas novel I read just before Christmas.

The Man in the Iron Mask is the last book in the d’Artagnan series which began with The Three Musketeers and continued with Twenty Years After, The Vicomte de Bragelonne and Louise de la Vallière. The final three in the series were originally published as one novel, which must have been enormous; it’s easy to see why most publishers now split it into separate volumes! I think most people probably just go straight from The Three Musketeers to The Man in the Iron Mask – after all, they are the two best known and the most often filmed of the d’Artagnan stories – but I don’t regret having taken the time to read the ones in between. I did enjoy them all, particularly Twenty Years After, and it meant that I went into this, the final book, with the background knowledge I needed to be able to get straight into the story.

Unlike The Vicomte and Louise, which deal mainly with the political and romantic intrigues of various members of the 17th century French court, in The Man in the Iron Mask, the focus returns to d’Artagnan and his three friends, Athos, Porthos and Aramis. The first half of the novel revolves around Aramis and a plot involving a man imprisoned in the Bastille who bears a striking resemblance to the King of France. I won’t say too much about this as I wouldn’t want to spoil the story for future readers, but suffice it to say that things don’t go exactly as according to plan and both Aramis and Porthos (who, as usual, has become implicated in the schemes of others while blissfully unaware of what is really going on) find themselves in trouble.

We then catch up with Raoul, the young Vicomte de Bragelonne, who is trying to come to terms with the discovery that his beloved Louise de la Vallière is now the mistress of Louis XIV. Devastated by the loss of Louise, Raoul agrees to accompany the Duc de Beaufort on an expedition to Africa. How will his father, Athos, cope in his absence? D’Artagnan, meanwhile, has remained loyal to the king and for much of this novel he is caught up in the final power struggle between the two rival finance ministers, Fouquet and Colbert. When his duties bring him into conflict with Aramis and Porthos, however, d’Artagnan must find a way to serve his king without betraying his friends.

This is a much more exciting, action-packed book than the two preceding ones. The actual ‘man in the iron mask’ has a relatively small role to play but the plot has serious consequences which are explored throughout the remainder of the novel as we follow our old friends, the musketeers, to the end of their careers. I was pleased to see so much more of d’Artagnan and his friends than we did in the last two books, but I was disappointed by the lack of scenes with all four together (it was the relationship between the four of them, in my opinion, that made the first Musketeers novel such a joy to read) and that Athos’ storyline seemed to barely intersect with the others. Athos was my favourite character in the original Musketeers book and I really dislike the direction Dumas took him in throughout the later books in the series, particularly after Raoul became more prominent in the story. It’s funny that Aramis, my least favourite, ended up being the character I found the most interesting!

Towards the end, The Man in the Iron Mask also becomes a very sad book; after spending so much time with these characters – literally thousands of pages over the last few years – I didn’t want to have to say goodbye to any of them. Dumas ties things up very neatly in the final chapters…a bit too neatly for me; I would have preferred a happier ending with more left to the imagination! Still, I did enjoy this book and was delighted to discover that Dumas had written yet another, often forgotten, sequel to The Three Musketeers. It’s called The Red Sphinx and is being made available in a new English translation this month. I’m reading it now and am pleased to say that so far it’s definitely living up to my expectations!