This week Lory of The Emerald City Book Review is hosting her annual Witch Week event, a celebration of fantasy books and authors. This year’s theme is Dreams of Arthur – books which draw on the Arthurian legends. Having read and loved Mary Stewart’s Merlin trilogy a few years ago, I thought this would be the perfect opportunity to read The Wicked Day, another of her Arthurian novels.

There is some overlap between The Wicked Day and the events of the final Merlin novel, The Last Enchantment, but in this book the focus switches to Mordred, the son of King Arthur and his half-sister, the witch Morgause. At the beginning of the novel, Mordred is being raised by peasants in the Orkney Islands and is unaware of his true parentage. It is only by chance that he is brought back into contact with his real mother, Morgause, by now the widow of King Lot of Lothian and Orkney, with whom she has had four more sons. Aware of Merlin’s prophecy suggesting that Mordred will be the cause of Arthur’s death, Morgause takes the boy into her household, sensing that he could be a useful weapon against Arthur.

Eventually, Morgause and her sons are summoned south to Camelot and Mordred will have to decide where his loyalties lie. But even if he chooses Arthur, will he be able to defy the prophecy or will he prove to be his father’s downfall after all?

I enjoyed this book, though maybe not quite as much as the three Merlin novels, which is probably because I found Merlin himself a more appealing character than Mordred. Having said that, Mary Stewart’s portrayal of Mordred is much more sympathetic than I had expected. Although my knowledge of Arthurian legend is very limited, I had gained the impression from other sources that Mordred was a villain, a traitor who betrayed Arthur. Stewart’s Mordred is not like that at all. He’s by no means perfect – he does have flaws and makes mistakes – but he always has the best of intentions and although he is ambitious any trouble he does cause for Arthur is largely due to circumstances outside his control.

As well as Mordred’s relationship with Arthur, his interactions with his four half-brothers – Gawain, Agravain, Gaheris and Gareth – are also explored. Their attitudes towards Mordred range from suspicion and rivalry to reluctant acceptance and respect. As I’ve said, I don’t know a lot about the Arthurian legends, so although I had heard of King Lot’s four sons and had a basic idea of how their stories would play out, it really was only a basic idea! The advantage of going into a book knowing very little about a subject is that you can be kept in suspense wondering what is going to happen and enjoy the story for its own sake, without any preconceived opinions; on the other hand, it would have been nice to have had other versions of the story and characters in mind so that I could have made comparisons and looked for similarities and differences.

At the end of the book we are given brief retellings of the sections of Sir Thomas Malory’s Le Morte d’Arthur and Geoffrey of Monmouth’s The History of the Kings of Britain which deal with the Mordred legend. Stewart then goes on to explain why she chose to interpret Mordred’s character the way she did; I found it interesting to read that while she was writing the earlier Merlin novels she had accepted the traditional view of Mordred as a villain and only changed her mind when she came to research his story in detail. 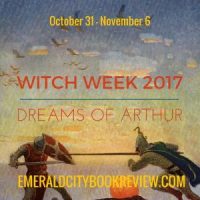 As with Mary Stewart’s other Arthurian novels, the elements of fantasy in The Wicked Day are very subtle and understated, amounting to not much more than a few prophecies and visions. The 6th century Britain that she recreates is a real, believable place and her books feel much more like historical fiction than fantasy, which is possibly why I like them so much. I am planning to read her final Arthurian novel, The Prince and the Pilgrim, and will then see how other authors have approached the legends. When I reviewed The Last Enchantment I received lots of ideas for future reading in the comments, so I have plenty of books and authors to explore. Chris of Calmgrove has also put together a very informative guest post for Witch Week with more suggestions and recommendations.

17 thoughts on “Witch Week: The Wicked Day by Mary Stewart”