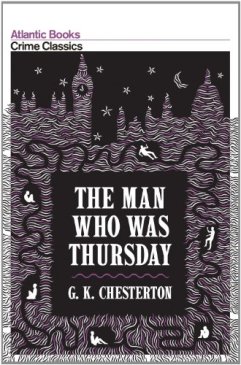 This 1908 novel from the author of the Father Brown mystery series is subtitled A Nightmare and it certainly does have a dreamlike feel. I picked it up expecting a vintage detective novel and emerged at the other end wondering what on earth I had just been reading and what it meant.

The novel opens with a conversation between two men who meet for the first time one evening in Saffron Park in London. One, Lucian Gregory, is an anarchist poet; the other, Gabriel Syme, is a member of the secret anti-anarchist police. They spend the whole of the first chapter debating the meanings of anarchy and of law and order, using arguments like this:

Gregory struck out with his stick at the lamp-post, and then at the tree. “About this and this,” he cried; “about order and anarchy. There is your precious order, that lean, iron lamp, ugly and barren; and there is anarchy, rich, living, reproducing itself—there is anarchy, splendid in green and gold.”

“An artist disregards all governments, abolishes all conventions. The poet delights in disorder only. If it were not so, the most poetical thing in the world would be the Underground Railway.”

“Nonsense!” said Gregory, who was very rational when anyone else attempted paradox.

It seems they will never agree, but to at least prove that he is serious about his cause, Gregory invites Syme to accompany him to an underground meeting of anarchists. Gregory gets more than he bargained for, however, when Syme puts himself forward for a position in which he himself had been interested: one of seven coveted seats on the Council of the Seven Days, the central council of the European anarchists.

Elected to the council and given the code name Thursday, Syme is introduced to his fellow days of the week, but will he be able to prevent them from guessing that he is an undercover policeman? And who is Sunday, their mysterious and sinister leader who is so big, so powerful and so much larger than life?

I don’t think there is much more I can say about the plot without spoiling the story. I can’t discuss the themes of the novel either, or the symbolism it contains, because those things are also spoilers. It’s such a strange and unusual book that I really think it’s best not to know too much about it before you begin. Just be aware that it’s not a conventional mystery or detective novel (or a conventional anything). There are parts that I loved, such as a scene where Syme is followed through the streets of London in the snow; there are funny moments too, some witty and amusing dialogue, and lots of thought-provoking philosophical ideas. At other times it becomes a little bit too bizarre, particularly after the action moves to France halfway through the book.

There are plot twists throughout the novel, some of which are quite predictable – but the revelations near the end of the book were not what I had been expecting at all. Looking back, there were plenty of hints and clues, but I didn’t pick up on them. I’m sure I didn’t fully grasp what Chesterton was trying to say, but I think there are probably different ways to interpret this book anyway. It certainly left me with a lot to think about and I love it when that happens – when you continue to engage with a story even after you’ve turned the final page.

I don’t have any more of Chesterton’s books, but I see there are some I could read for free at Project Gutenberg. I have previously read two of his Father Brown short stories (included in Miraculous Mysteries and Murder Under the Christmas Tree); should I read more of those or is there another of his books that you would recommend?

16 thoughts on “The Man Who Was Thursday by GK Chesterton”