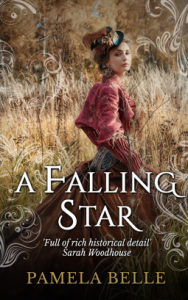 The third book in Pamela Belle’s Wintercombe series moves on to the next generation of the St Barbe family. Having enjoyed both Wintercombe and Herald of Joy last year, I decided to wait a little while before beginning A Falling Star; I think that was the right decision as it meant I could approach it with a mind open to meeting new characters and embarking on new storylines, rather than just wanting more of Silence and Nick.

A Falling Star is set in the 1680s, several decades after Herald of Joy ended. It opens with the return to Wintercombe of Sir Alexander St Barbe, who has been living in exile in the Low Countries but has come home to take up his inheritance following his father’s death. Alexander (or Alex as we will now call him) brings with him a reputation for drunkenness and debauchery, but this doesn’t deter his cousin Louise, another new arrival at Wintercombe. Louise, who was brought up in France, has been sent to England in the hope that she will find a nice Protestant husband there. Alex is presumably not the sort of man her mother has in mind, but Louise is instantly drawn to him and it seems that the attraction is mutual.

Not everyone is pleased to have Alex home, though. Another cousin, Charles St Barbe, still hasn’t given up hope of inheriting Wintercombe himself. After all, he had been helping Alex’s father to run the estate for several years, and unless Alex can produce a legitimate child of his own, Charles is the next heir. If only Alex had stayed away, Wintercombe could have been his. Unfortunately, Alex does nothing to endear himself to Charles and what begins as a natural resentment quickly develops into hatred. Outside the walls of Wintercombe, meanwhile, rebellion is brewing as the Duke of Monmouth prepares to launch his attempt to overthrow James II. There’s a lot of support for Monmouth’s cause throughout Somerset and its neighbouring counties, but which side will the St Barbes choose?

I have read about the Monmouth Rebellion before, but it has only been touched on briefly in other novels I’ve read. This is the first fictional account I’ve read that has gone into so much detail and I found it all fascinating, from the views of the people of South West England and their reasons for supporting (or not supporting) the Duke, to the descriptions of the battles and the fate of the men who fought in them. Because two of Silence’s grandchildren – Bram and Ben – are directly involved, the reader is pulled into the heart of the action rather than just hearing about events from a distance.

We do see quite a lot of Silence and a little bit of Nick as well, but this is definitely the story of the younger generation. If you have read the previous books, you will remember that Silence and Nick had quite a few children and stepchildren between them – and now those children each have families of their own. I felt slightly overwhelmed by the number of new characters at first, and the relationships between them, but it quickly became clear which ones were going to have a significant role in the story and which I didn’t need to worry about too much. I have already mentioned Bram and Ben, Louise, Alex and Charles, all of whom are interesting characters in their different ways; the other St Barbe cousin with an important part to play is Phoebe, Alex’s sister. I loved Phoebe, whose strength of character more than makes up for her physical weaknesses.

The way the book ends sets things up nicely for the finale, Treason’s Gift, which I’m sure I’ll be reading soon!

7 thoughts on “A Falling Star by Pamela Belle”