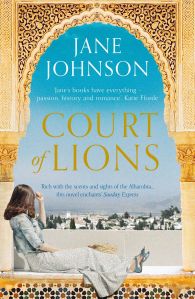 The Court of the Lions is part of the Alhambra, the magnificent palace and fortress in the Spanish city of Granada which forms the setting for Jane Johnson’s latest novel. Having read and enjoyed one of her previous books (The Sultan’s Wife, set in 17th century Morocco), I’m pleased to have had the opportunity to read Court of Lions as part of a blog tour organised by publisher Head of Zeus. You can see the schedule for the other stops on the tour at the end of this post.

Court of Lions is a novel set in two different time periods. First, in the present day, we meet Kate Fordham, who has fled from a troubled marriage in England and is working in a bar in Granada, hoping she has done enough to prevent her husband from finding her. One day, exploring the gardens of the Alhambra, she discovers a scrap of paper pushed into a crack in a wall. Written on it is a message in an unfamiliar language and although Kate is unable to translate it, she senses that it could be important. And she is right, because her discovery leads her to form new relationships and to find the strength she needs to move on.

Alternating with Kate’s story is another story, set in the late 15th century and introducing us to Abu Abdullah Mohammed, the last Sultan of the Emirate of Granada, given the name Boabdil by the Spanish, but referred to in the novel as Momo. We get to know Momo from the point of view of a fictional character, Blessings, a slave child brought from Morocco to be his companion. Growing up together at the Alhambra, Momo and Blessings become close friends – and a loyal friend is what Momo desperately needs as he prepares to face the challenges which await him: a struggle for the throne against his own father and uncle, and war with Catholic Spain, led by King Ferdinand and Queen Isabella.

I found the 15th century storyline completely fascinating and compelling. I have read a little bit about the fall of Granada before, but not from this perspective, so most of it was new to me. The sequence of events leading up to the surrender of the city is described in just the right amount of detail and left me wanting to explore the period further, which is something all good historical fiction should do. Momo’s personal life, his marriage and the fates of his children are also given some attention, all seen through the eyes of Blessings – who is not exactly an unbiased observer as it quickly becomes clear that what he feels for the young Sultan is more than just friendship. Blessings himself is also an interesting character and although I don’t want to say too much here, there are revelations later in the book which answered some of the questions I had about him.

The modern day sections of the novel were slightly less successful. I did like Kate and enjoyed watching as she made new friends in Granada and learned about their culture and lifestyle, but I found the storyline involving her disastrous marriage very melodramatic (again I don’t want to give too much away). Although some of the threads linking the two time periods together are a bit too coincidental to be convincing, I liked the fact that the two share common themes such as religious conflict, prejudice and tolerance – things which were relevant in Momo’s day and are still just as relevant in ours.

The descriptions of Spain and the Alhambra itself are beautifully written. One of my aims for 2018 is to read more fiction set in countries other than my own so I have taken a step towards achieving that aim by reading Court of Lions. Thanks to Head of Zeus for providing a copy for review. 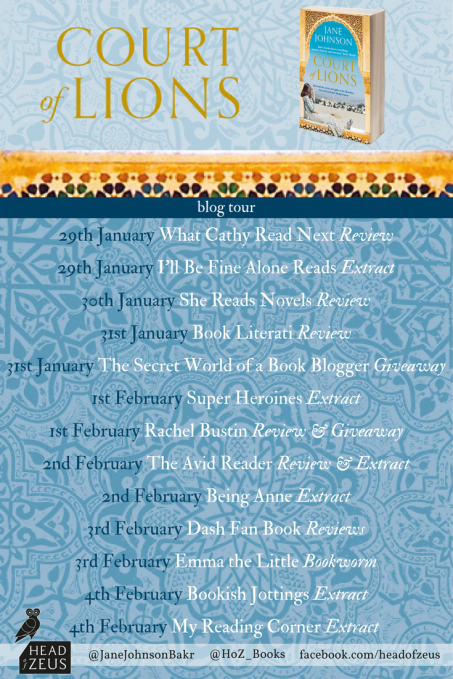 13 thoughts on “Court of Lions by Jane Johnson”