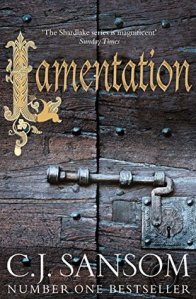 When I heard the exciting news that there was a new Shardlake novel – Tombland – coming in October, I remembered that I still needed to read Lamentation, the sixth book in the series, so I put it on my 20 Books of Summer list to ensure that I would read it sooner rather than later and be up to date in time for the new one.

Lamentation is set in London in 1546, about a year after the previous novel, Heartstone, ended. Henry VIII is in poor health and although it is treason to predict the death of a king, it is obvious to everyone who sees him that he can’t have much longer to live. Having broken away from the Roman Catholic Church several years earlier, it now seems that Henry is slowly moving England back towards Rome. A power struggle is taking place at court between the religious traditionalists and the reformers, while those suspected of heresy are being hunted down, tortured and burned at the stake. Even the Queen herself – Henry’s sixth wife, Catherine Parr – is not above suspicion, and when a book she has written on the subject of her faith, titled The Lamentation of a Sinner, is stolen, she knows her life could be at risk.

Our narrator, the lawyer Matthew Shardlake, has worked for the Queen before, and it is to Shardlake that she turns again to ask for assistance in finding the missing book. Despite having vowed to stay out of politics following the events of Heartstone, Matthew can’t resist a request from his Queen, but when the first page of the manuscript is found clutched in the hand of a murdered printer, the danger involved in the mission becomes clear.

I’ve enjoyed all of the Shardlake novels, but I think this is one of the best in the series. It’s a long book, with over six hundred pages, but at no point does it ever start to feel slow or repetitive. The plot is complex and does require some concentration – it’s important to try to remember the religious and political backgrounds of various characters and which are allies and which are rivals, especially as various groups of suspects begin to emerge – but in my case I was so absorbed in the story my concentration never wavered for a moment anyway. I always find Sansom’s portrayal of Tudor England very immersive; he manages to make the history of the period easy to understand, but without simplifying things too much, and shows us how the decisions made by those in power affect the lives of ordinary people who are just trying to survive from day to day.

As well as the search for Catherine’s stolen book, there is also a secondary mystery taking place in which Shardlake is representing a client who is locked in a feud with her brother over the wording of their mother’s will. Most of the Shardlake novels have multiple storylines and sometimes they feel a bit unconnected, but everything in this book comes together very effectively. The two feuding siblings are on opposite sides of the religious divide and this eventually has implications for Matthew.

Of course, Matthew doesn’t have to deal with all of this alone. His friend and legal assistant, Jack Barak, is there for him as usual and always ready for an adventure – although with Jack’s wife expecting another baby, Matthew is reluctant to let him get involved. He also has a new assistant – Nicholas Overton, a young man who has been sent to London to study law – and over the course of the novel he comes to value Nicholas’s courage and loyalty. Another old friend, the doctor and former monk, Guy, is back too, but their friendship is put under strain by Guy’s disapproval of Matthew’s mission and the very different religious views they each have. Nobody, including Shardlake, ever comes out of a Shardlake novel entirely unscathed and this is why, although it would be possible to treat the books as standalones, I still recommend reading the series in order. That way, you’ll be able to watch the characters develop and see how the things that happen in one book affect their lives in the next.

By the end of this book Henry VIII is dead, to be succeeded by his son, the young Edward VI. The change of monarch – and the consequences this will have for the country – is sure to bring new challenges for Shardlake but we will have to wait for the publication of Tombland to find out what they are.

14 thoughts on “Lamentation by CJ Sansom”