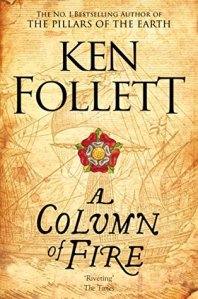 Years before I started this blog – sometime in the 1990s, anyway – I read The Pillars of the Earth, Ken Follett’s epic novel about the building of a cathedral in the English market town of Kingsbridge during the 12th century. I found it much more exciting than it had initially sounded and I was soon gripped by the evil machinations of William Hamleigh, Prior Philip’s battle against the ruthless Bishop Waleran, and the seemingly doomed romance between Jack and Aliena. I’m sure I would be much more critical of it if I re-read it today and more likely to be bothered by the historical inaccuracies, but I loved it at the time. I wasn’t expecting a sequel, but one was published in 2007 – World Without End, set in the same fictional town (or city, as it has now become) more than a century later. I enjoyed that one too, although in some ways it felt to me like the same story being told again.

A Column of Fire, published in 2017, takes us back to Kingsbridge again for a third story, set this time in the 16th century. As the novel opens in 1558, Ned Willard is returning home to Kingsbridge from Calais, where he has spent a year working in the family business. Ned can’t wait to be reunited with his mother, Alice, who runs the Kingsbridge branch of the business, but there’s also someone else he is looking forward to seeing again – Margery Fitzgerald, the young woman he hopes to marry. Unfortunately for Ned, things have changed during his absence and Margery is now betrothed to Bart, the heir of the Earl of Shiring (and those of you who have read the other Kingsbridge novels will remember exactly what those Earls of Shiring are like). Margery would prefer to marry Ned, but her parents won’t allow it – the Fitzgeralds, like the Earl and his family, are Catholic, but the Willards are suspected of having Protestant sympathies.

While Mary Tudor still sits on the throne of England, families like the Fitzgeralds and the Shirings may have the upper hand, but Ned knows that one day things will change. Mary’s half-sister Elizabeth, promising greater religious tolerance, is waiting for her turn to wear the crown and, when she does, she will need men like Ned to be her trusted servants and spies.

Across the sea, meanwhile, France is also experiencing a period of religious conflict and turmoil as the ambitious and staunchly Catholic Guise brothers, whose young niece Mary, Queen of Scots has married the heir to the throne, engage in a power struggle with Catherine de’ Medici, the Queen of France. In Paris, we meet one of the villains of the novel, Pierre Aumande, a man who believes he has Guise blood and will do anything to inveigle his way into that family – including hunting down French Protestants and sending them to their deaths.

So far, I have only touched on a few of the characters and storylines this novel contains. There are many, many more. We follow the adventures of Ned’s brother Barney in Spain and then the New World. We meet Sylvie Palot, a French Huguenot who works in a Parisian bookshop, buying and selling forbidden literature. We see the story of Mary, Queen of Scots play out as she returns to Scotland and eventually becomes a prisoner on the orders of Elizabeth I. And we witness the Siege of Calais, the St Bartholomew’s Day Massacre, the Spanish Armada and the Gunpowder Plot. The novel has a huge scope, and that, I think, was a problem. There’s too much happening – far too much for one book – and that made it difficult for me to become truly absorbed in the lives and struggles of any of the characters. There’s no depth, no passion, no emotion; I didn’t really care about Ned and Margery’s romance, and I didn’t hate Pierre and the other villains as much as we were probably supposed to either.

That doesn’t mean I found nothing to like about this book. It’s certainly a fascinating period of history to read about and I can understand why Follett didn’t want to leave anything out, even though I would have preferred a tighter focus on just a few of the historical figures and incidents, rather than everything and everyone! The main theme of religious change and conflict was handled well. I really enjoyed the first half of the book but my interest started to wane as characters were abandoned for long stretches while others were introduced and as we spent more time in France, Spain, Scotland and the Caribbean, almost losing sight of Kingsbridge entirely.

I’m not really sure why this book involved Kingsbridge at all; I’m assuming it was probably done for marketing purposes, to pull in readers who enjoyed the previous two novels, but I think if it had been written as a standalone with no connection to the other two I would have had different expectations and might have judged it less harshly. One of the things I liked about The Pillars of the Earth and World Without End was that they were set in and around Kingsbridge Cathedral itself. We get to know the people who live and work in the city and there’s a strong sense of community as they come together to confront their enemies and face the threats of the outside world, but A Column of Fire is a different sort of story with a different feel. If anyone else has read this book I would be interested to know what you thought of it and how you felt it compared to the first two books.

15 thoughts on “A Column of Fire by Ken Follett”