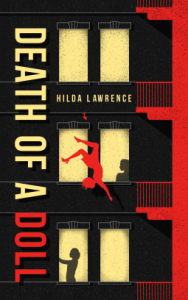 Hilda Lawrence was an American crime author best known for her series of novels featuring the private investigator Mark East, published during the 1940s. This one from 1947, Death of a Doll, is the third in the series and has been reissued this month by Agora Books. Lawrence is one of several ‘forgotten’ or lesser known crime writers to be brought back into print by various publishers recently; sometimes it’s easy to see why an author’s books have been allowed to fade into obscurity, but I was very pleasantly surprised by this one and am hoping the rest of the Mark East series will be made available again too.

The story is set in and around Hope House, a home for young women in New York City run by Monica Brady and her assistant Angelina Small. The home provides seventy girls with a safe refuge where, for a small fee, they can have a bed, hot water, two meals a day and the opportunity to make new friends. At the beginning of the novel we meet Ruth Miller, a woman in her twenties who works in Blackmans department store and who is excitedly telling her regular customer, Roberta Sutton, that she has been offered a place at Hope House. We don’t know why Ruth has found herself with nowhere else to go and nobody to turn to, but she gives the reader a hint that there has been some sort of trouble in her past. Later that day, we see her arriving at her new home, suitcase in hand, full of optimism for the future.

Two days later, Ruth is dead, having fallen from a window on the seventh floor of Hope House during a party at which all of the girls were dressed in rag doll costumes. Suicide is assumed, but Roberta is not convinced. Why would Ruth have killed herself just as her life was beginning to improve? What the reader knows, but the characters don’t – although some of them suspect – is that during those few days at Hope House, Ruth came face to face with someone from the past…but who was it and how could this have led to her death?

Roberta calls in her private investigator friend, Mark East, who arrives in New York accompanied by two more amateur detectives, the elderly spinsters Miss Beulah and Miss Bessy. It’s going to be difficult to know where to start – there’s so little known about Ruth and her background, and the fact that all of the girls were dressed in identical doll costumes on the night of her death doesn’t help – but surely between the three of them they can solve the mystery?

I really enjoyed this book. Although the story is slow to unfold – a lot of time is spent on exploring the relationships between the various girls and employees at Hope House – I still found it difficult to put down. I didn’t guess the culprit correctly, but felt as though I probably should have done! I did suspect almost all of the ‘dolls’ at one point or another, constantly changing my mind as more information was revealed. The setting is wonderful too; I could vividly picture the interior of Hope House, with Kitty answering the phones on the switchboard, Jewel operating the elevator, and Miss Brady and Miss Small seeing that everything ran smoothly, while making ambitious plans for the future.

My only problem with the book was that I felt there were too many characters and that we saw things from too many different viewpoints. I’m not sure whether we really needed three detectives either. I think Beulah and Bessy were probably included to lighten the mood and provide some comedy, but they didn’t add much to the story in my opinion and I would have preferred to have spent more time following Mark’s investigations instead. Otherwise, this was a great first introduction to Hilda Lawrence’s work and an unusual combination of the cosy and the dark and suspenseful.

I received a copy of this book for review via NetGalley.

13 thoughts on “Death of a Doll by Hilda Lawrence”