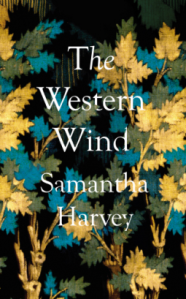 When The Western Wind was longlisted for the Walter Scott Prize for Historical Fiction in March, I decided to read my copy of the book before the shortlist was announced so that I could see whether I agreed with its inclusion or omission. Now that I’ve read it, although I can’t really say that I particularly enjoyed it, I wasn’t surprised to see this morning that it has been shortlisted as I found it a complex, multi-layered novel with an unusual structure and some interesting ideas to explore. The sort of book judges usually like, I think!

The Western Wind is, on the surface, a murder mystery set in a small English village in 1491. Oakham in Somerset is an isolated place, cut off from the rest of the world by a river without a bridge. The wealthy Thomas Newman, who understands the importance of trade, has plans to rebuild the bridge, but before work can begin he disappears, presumed to have been swept away by the river and drowned. But was it an accident or was it murder? Lord Townshend, who has been losing some of his lands to Newman, would seem to have the most obvious motive, but he is not the only suspect…

Under pressure from his dean to discover what really happened, village priest John Reve listens to the confessions of his parishioners and is surprised by how many of them are willing to confess to having some involvement in Newman’s death. It is up to Reve to use his judgement and his knowledge of his friends and neighbours to decide who is telling the truth. The story, however, is told in reverse, beginning on day four and then moving back in time to a point just before Newman’s disappearance – and by the time we reach the end of the novel, it has become clear that Reve himself knows much more than he seemed to at first.

Despite the mystery at the heart of this novel, I didn’t feel that it was the main focus of the book. The fate of Tom Newman acts as a starting point from which we – through the eyes of John Reve – explore the daily lives of the people of Oakham, their personalities and relationships, the way their community is structured, and the superstitions and traditions that rule their lives. Social and economic change is another theme; even Newman’s name is symbolic, as he is a relevant newcomer to the village, bringing with him new ideas and new ways of looking at the world.

Although we are told that the book is set in February 1491 (at the beginning of Lent) I would otherwise have found it hard to say exactly when the story is taking place. There are very few references to anything happening in the wider world that give us any clues to the precise time period, but maybe that is the point – news from outside would be slow to reach the isolated, insular Oakham after all. I’m not sure how much importance the author places on historical accuracy in any case; she has acknowledged that the confession box which plays such a big part in the story wouldn’t have arrived in English churches until the following century, but she decided to keep John Reve’s box in her novel anyway. I have to admit, I’ve never given any thought to when confession boxes first came into use – but I am fairly sure that fifteenth century men didn’t wear trousers with waistbands as Herry Carter does in the opening chapter of the book. This is the sort of thing that will either bother you or it won’t, I suppose.

I did like Samantha Harvey’s writing but, as well as the points I’ve made above, there was something about the story that left me feeling slightly dissatisfied. I think part of that was due to the fact that, with the exception of John Reve as our narrator, I struggled to connect with any of the characters. This was probably because the way the novel is structured makes it difficult to tell whether we can trust or rely on anything they say or do, especially as we only witness their words and actions from Reve’s perspective. I’m sure that if I’d taken the time to go back and read the whole book again from the beginning, it would have been a very different experience the second time. I didn’t enjoy the book enough to want to do that, but I think it would have helped me to fully understand and appreciate it.

Thanks to Jonathan Cape for providing a copy of this book for review via NetGalley.

11 thoughts on “The Western Wind by Samantha Harvey”