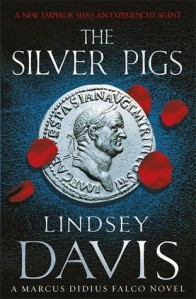 I love historical mysteries but have never felt drawn to Lindsey Davis’ Falco series as the setting – Ancient Rome – is not one of my favourites. Recently, though, I have discovered a few books set in Rome that I’ve enjoyed and have been open to reading more, so I thought I would give the first book, The Silver Pigs, a try. When I noticed that my library had the first four in the series available to download as audiobooks, I decided that as I was stepping slightly out of my comfort zone anyway with the Roman setting, I may as well step out of it completely with a format I usually avoid.

Audiobooks tend not to work for me because I find that my attention wanders more easily when I’m listening to a book than it does when I’m reading it on paper, but I did my best to concentrate on this one and was mostly successful. It is read by the British actor Christian Rodska and although I wasn’t sure about his voice at first (he sounded too old for the thirty-year-old Falco) I changed my mind after a while and decided that his voice was well suited to the down to earth, humorous style of the writing.

The novel opens in the year 70 AD with an encounter between our narrator, ‘private informer’ Marcus Didius Falco, and a young woman who is being chased through the Forum. After helping her to escape from her pursuers, Falco learns that the girl’s name is Sosia Camillina and that she is the niece of a powerful senator. It seems that Sosia has become embroiled in a conspiracy involving a secret stockpile of silver ingots (known as ‘silver pigs’) – a conspiracy which could pose a threat to the rule of the Emperor Vespasian.

To find out who is behind the plot, Falco is sent to the silver mines of Britannia, something he is less than thrilled about because Britannia is a cold, miserable place in winter. During his time there he meets the senator’s daughter Helena Justina, Sosia’s cousin, an intelligent, opinionated young woman to whom Falco takes an instant dislike – and the feeling is mutual. Given the job of escorting her back to Rome, Falco is unsure which task will give him more trouble: solving the mystery of the silver pigs or dealing with Helena!

As I’ve said, Ancient Rome is not one of my usual subjects when it comes to reading historical fiction, so this was an educational read for me as well as an entertaining one. Knowing that Lindsey Davis seems to be highly regarded for her research and accuracy, I could trust that what I was learning was correct (apparently since the book was first published in 1989 new evidence emerged showing that the description she gives of the process used in the formation of silver pigs may not be accurate, but that’s just proof of how our knowledge of history is still changing and evolving).

I wasn’t sure what to think of Falco as a character; I found him a bit off-putting in the opening chapters where his first thought on seeing sixteen-year-old Sosia Camillina is that she’s ‘wearing far too many clothes’ and then, when she tells him she’s not married, he thinks ‘she looked like a person who soon should be’. As I read on, though, I found that he is maybe not quite the sophisticated womaniser he wants us to think he is, but a young man who is trying to get out from under the thumb of his domineering mother and the shadow of his late brother, the military hero Didius Festus, and who is a beloved uncle to his little niece Marcia.

The mystery itself didn’t really interest me, to the point where I started to lose track of what was happening towards the end, although that could have been partly because, as I’ve mentioned, I find it harder to concentrate on the spoken word than the written word. This is the first book in the series, though, so it’s possible that some of the later ones have stronger plots. I will try the second one, but probably in traditional book format rather than audiobook.

Since I finished The Silver Pigs, it has been announced that there are plans for a new adaptation of the Falco novels by ITV and Mammoth Screen, so it seems I have chosen a good time to start reading them!

18 thoughts on “The Silver Pigs by Lindsey Davis”