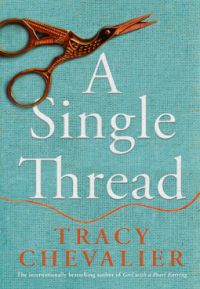 Violet Speedwell is a ‘surplus woman’ – a woman whose fiancé was killed in the First World War and who, like more than a million other British women, is now unlikely to find a husband because there are simply no longer enough men to go around. Tracy Chevalier’s new novel, A Single Thread, tells Violet’s story beginning in 1932 when Violet, who has stayed at home with her mother until the age of thirty-eight, decides that it’s finally time to move out and build a life of her own.

Moving from Southampton to nearby Winchester, Violet is determined to be financially independent but it’s not easy on the low wages she earns as a typist in the office of a small insurance company. By the time she’s paid to rent a room in a house shared with two other women she finds that she’s struggling to buy a hot meal or put coal on the fire. This is all very depressing at first, but a visit to Winchester Cathedral changes everything. Here she meets a group of women who call themselves the Winchester Cathedral Broderers and who devote their spare time to embroidering cushions and kneelers for the cathedral seats and benches. Violet decides to attend one of their weekly meetings and soon she is learning new skills and making new friends.

One of these friends is Gilda Hill, another single woman, who introduces her to Arthur, an older man who volunteers with a group of bell-ringers at the cathedral. Violet likes Arthur immediately but she is aware that he has a wife and daughter, so anything more than friendship must be out of the question. Still, with the help of Gilda, Arthur and others, Violet begins to find her place in her new community – until events back in Southampton force her to make an important decision.

This is a quiet, gentle book – not one with a dramatic, exciting plot – but I found it completely absorbing. I liked Violet and sympathised as she tried to navigate a society designed for men and married women; as a single woman she faced a large number of challenges and I particularly admired the way she dealt with her male employer who had never even considered the pay and working conditions of his female workers. Some of the other women amongst the Winchester Broderers had interesting stories of their own too, especially Gilda and Dorothy, and I was intrigued to learn that the woman leading the embroidery project, Louisa Pesel, was a real person.

I have to admit, the detailed descriptions of different types of embroidery stitches and patterns didn’t interest me all that much, but the enthusiasm of Violet and the other Broderers and the pride they took in their work came across strongly. Similarly, I didn’t share the passion of Arthur and his friends for bell-ringing, but I did enjoy hearing them explain what was involved and why they found it so rewarding.

I wasn’t completely satisfied with the way the book ended as I found it too predictable and would have preferred something more unconventional for Violet, but I still thought it was an enjoyable and insightful read, highlighting a section of 1930s society we don’t hear enough about.

12 thoughts on “A Single Thread by Tracy Chevalier”