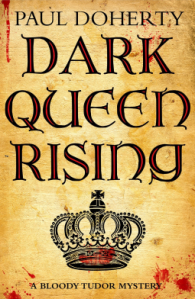 Paul Doherty is a very prolific author of historical mysteries; he has been writing since the 1980s and has written many series under several pseudonyms, set in a variety of periods including medieval England, Ancient Greece and Ancient Egypt. So far, my only experience of his work has been his standalone novel, Roseblood, which I really enjoyed, so when I came across Dark Queen Rising, the first in a new series set during my favourite period – the Wars of the Roses – I immediately wanted to read it.

The novel opens in 1471, just after the Battle of Tewkesbury, a battle which has ended in victory for the House of York and defeat for their rivals, the House of Lancaster. With the deposed Lancastrian king, Henry VI, held prisoner in the Tower of London, the victorious Yorkist army sets about destroying the other prominent noblemen who fought for Lancaster, including Henry’s heir, the young Prince of Wales. The Yorkist king, Edward IV, now sits securely on the throne of England – or does he? Margaret Beaufort, mother of one of the few remaining Lancastrian claimants, Henry Tudor, is making plans on behalf of her son, while Edward IV’s own brother – George, Duke of Clarence – is also gathering information that could bring about the king’s downfall.

Dark Queen Rising is described as the first in a series of ‘Margaret Beaufort mysteries’, which I think is slightly misleading – and looking at other reviews, it does seem that a lot of readers were expecting a different sort of book. There is a mystery, which develops when four men in the service of the Duke of Clarence are found dead in a tavern, but this doesn’t happen until the middle of the book and is never really the main focus of the novel. It’s more of a thriller, delving into the politics of the time and exploring some of the intrigue, plotting and controversy that makes this such a fascinating period of history.

Bearing in mind that Margaret Beaufort is one of the main characters in this book, I was surprised when, early in the novel, I saw a reference to her husband, ‘Sir Humphrey Stafford’. Margaret’s husband, of course, was Henry Stafford. Henry did have a brother called Humphrey who, coincidentally, was also married to another Margaret Beaufort, so I can see where the confusion has come from, but there’s really no excuse for not knowing which Margaret your novel is about. I was even more disappointed when, later in the book, references were made to Margaret’s future husband, William Stanley. This should have been Thomas Stanley, William’s brother. As the names of not just one but two of Margaret’s husbands were wrong, this made me question the accuracy of everything else in the novel, which is a shame as I do love this period and really wanted to enjoy this book.

George, Duke of Clarence has clearly been cast as the villain in this series, which is fair enough as history certainly tells us that he wasn’t the most honourable or trustworthy of people, but the way he is depicted in this book made him feel more like a caricature than a real person. When I think of the much more nuanced portrayals in books like Sharon Penman’s The Sunne in Splendour and Patrick Carleton’s Under the Hog, it’s disappointing. The character who did intrigue me in this book was Christopher Urswicke, who appears to be in Margaret’s employ but whose motives and true loyalties are not always very clear. I found the parts of the story written from Urswicke’s perspective much more interesting.

The second book in the series – Dark Queen Waiting – is out now, but because of the inaccuracies in this one, I’m not planning to read it, although I could possibly still be tempted by a sequel to Roseblood if one is ever written. Meanwhile, I’m now reading Thomas Penn’s new non-fiction book on the Wars of the Roses, The Brothers York, so I should be posting my thoughts on that one soon.

Thanks to Black Thorn for providing a copy of this book for review via NetGalley.