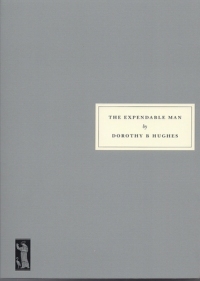 This weekend Jessie of Dwell in Possibility has been hosting another Mini Persephone Readathon and it seemed like the perfect opportunity to read The Expendable Man, one of the thrillers published by Persephone and a book that I’ve been meaning to read for a long time. It turned out to be a great choice.

Published in 1963, the novel opens with a young doctor, Hugh Densmore, driving from Los Angeles to a family wedding in Phoenix. On the way, he spots a teenage girl standing alone at the side of the road. Hugh doesn’t usually stop for hitchhikers but this time he finds himself slowing down…

He simply could not in conscience go on, leaving her abandoned, with twilight fallen and night quick to come. He had sisters as young as this. It chilled him to think what might happen if one of them were abandoned on the lonesome highway, the type of man with whom, in desperation, she might accept a lift. The car was stopped. He shifted to reverse and began backing up.

Hugh quickly begins to regret this impulsive act of kindness. The girl is rude, ungrateful and, when he questions her about who she is and where she is going, it is clear that she is telling lies. When they arrive in Phoenix, Hugh leaves his hitchhiker at a bus station and doesn’t expect to see her again, but that night the girl tracks him down at his hotel, setting in motion a series of events that could ruin the life and career he has built up so carefully for himself.

There’s really not much more I can say about the plot or the characters. If you think you might want to read this book, it’s best that you know as little as possible before you begin. And I do highly recommend reading it! I was completely gripped from beginning to end; when I first picked it up on Friday and started reading, I didn’t expect to actually finish it before the Readathon was over, but as it happened that wasn’t a problem at all. I couldn’t bear to put the book down until I knew what was going to happen to Hugh.

There’s an element of mystery-solving to the novel, but The Expendable Man is much more than a straightforward crime story. A few chapters into the book, there’s a twist – or maybe revelation is a better word to use – that changed the way I felt about what I had read so far and showed me that I had made an unfair assumption without even being aware that I had made it. It was so cleverly done and provided answers to some of the things I’d been wondering about as I read those earlier chapters.

I also loved the author’s beautifully written descriptions of the landscape, particularly near the beginning when Hugh is driving into Arizona. This is the first book I’ve read by Dorothy B Hughes and I was very impressed with every aspect of it! I would like to read more of her books, so if there’s one you would recommend please let me know.

12 thoughts on “The Expendable Man by Dorothy B Hughes”